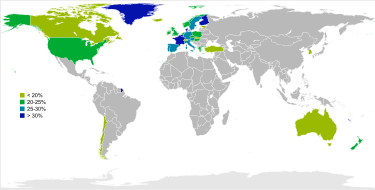 A welfare state is a concept of government in which the state plays a key role in the protection and promotion of the economic and social well-being of its citizens. It is based on the principles of equality of opportunity, equitable distribution of wealth, and public responsibility for those unable to avail themselves of the minimal provisions for a good life. The general term may cover a variety of forms of economic and social organization.<ref>Welfare state, Britannica Online Encyclopedia</ref> The sociologist T.H. Marshall described the modern welfare state as a distinctive combination of democracy, welfare, and capitalism.<ref name="Marshall">Marshall, T H. Citizenship and Social Class: And Other Essays. Cambridge [Eng.: University Press, 1950]. Print.</ref>

Modern welfare states include the Nordic countries, such as Iceland, Sweden, Norway, Denmark, and Finland<ref>Paul K. Edwards and Tony Elger, The global economy, national states and the regulation of labour (1999) p, 111</ref> which employ a system known as the Nordic model. Esping-Andersen classified the most developed welfare state systems into three categories; Social Democratic, Conservative, and Liberal.<ref>Esping-Andersen (1990); for a revision of his typology see Ferragina and Seeleib-Kaiser (2011).</ref>

The welfare state involves a transfer of funds from the state, to the services provided (i.e., healthcare, education, etc.), as well as directly to individuals ("benefits"). It is funded through redistributionist taxation and is often referred to as a type of "mixed economy".<ref>"Welfare state." Encyclopedia of Political Economy. Ed. Phillip Anthony O'Hara. Routledge, 1999. p. 1245</ref> Such taxation usually includes a larger income tax for people with higher incomes, called a progressive tax. This helps to reduce the income gap between the rich and poor.<ref>Pickett and Wilkinson, The Spirit Level: Why More Equal Societies Almost Always Do Better, 2011</ref><ref name=pigou>The Economics of Welfare| Arthur Cecil Pigou</ref><ref name=OstryBerg>Andrew Berg and Jonathan D. Ostry, 2011, "Inequality and Unsustainable Growth: Two Sides of the Same Coin?" IMF Staff Discussion Note SDN/11/08, International Monetary Fund</ref>