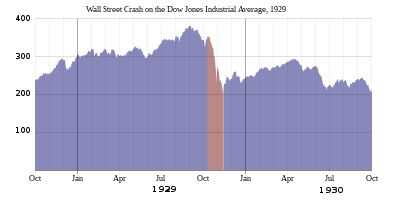 The Roaring Twenties, the decade that followed World War I and led to the Crash,<ref>"America gets depressed by thoughts of 1929 revisited" The Sunday Times</ref> was a time of wealth and excess. Building on post-war optimism, rural Americans emigrated to the cities in vast numbers throughout the decade with the hopes of finding a more prosperous life in the ever growing expansion of America's industrial sector.<ref name=farmdep>{{#invoke:citation/CS1|citation |CitationClass=web }}</ref> While the American cities prospered, the vast emigration from rural areas continued to neglect the US agriculture industry, and created widespread financial despair among American farmers throughout the decade.<ref name=farmdep /> This would later be blamed as one of the key factors that led to the 1929 stock market crash.<ref>http://millercenter.org/president/coolidge/essays/biography/8</ref>

Despite the dangers of speculation, many believed that the stock market would continue to rise indefinitely. On March 25, 1929, after the Federal Reserve warned of excessive speculation, a mini crash occurred as investors started to sell stocks at a rapid pace, exposing the market's shaky foundation.<ref name=pbsstock /> Two days later, banker Charles E. Mitchell announced his company the National City Bank would provide $25 million in credit to stop the market's slide.<ref name=pbsstock /> Mitchell's move brought a temporary halt to the financial crisis and call money declined from 20 to eight percent.<ref name=pbsstock /> However, the American economy showed ominous signs of trouble:<ref name=pbsstock /> steel production declined,{{ safesubst:#invoke:Unsubst||$N=Quantify |date=__DATE__ |$B= {{#invoke:Category handler|main}}[quantify] }} construction was sluggish,{{ safesubst:#invoke:Unsubst||$N=Quantify |date=__DATE__ |$B= {{#invoke:Category handler|main}}[quantify] }} automobile sales went down,{{ safesubst:#invoke:Unsubst||$N=Quantify |date=__DATE__ |$B= {{#invoke:Category handler|main}}[quantify] }} and consumers were building up high debts{{ safesubst:#invoke:Unsubst||$N=Quantify |date=__DATE__ |$B= {{#invoke:Category handler|main}}[quantify] }} because of easy credit.<ref name=pbsstock /> Despite all these economic trouble signs and the market breaks of March and May 1929, stocks resumed their advance in June and the gains continued almost unabated until early September 1929 (the Dow Jones average gained more than 20% between June and September). The market had been on a nine-year run that saw the Dow Jones Industrial Average increase in value tenfold, peaking at 381.17 on September 3, 1929.<ref name=pbsstock>{{#invoke:citation/CS1|citation |CitationClass=web }}</ref> Shortly before the crash, economist Irving Fisher famously proclaimed, "Stock prices have reached what looks like a permanently high plateau."<ref>{{#invoke:citation/CS1|citation |CitationClass=web }}</ref> The optimism and financial gains of the great bull market were shaken on September 18, 1929, when prices on the New York Stock Exchange (NYSE) abruptly fell a few days after a well publicized warning from financial expert Roger Babson that "a crash was coming". The initial September decline was thus called the "Babson Break" in the press.

On September 20, the London Stock Exchange officially crashed when top British investor Clarence Hatry and many of his associates were jailed for fraud and forgery.<ref name=hatrycrash>{{#invoke:citation/CS1|citation |CitationClass=book }}</ref> The London crash greatly weakened the optimism of American investment in markets overseas.<ref name=hatrycrash/> In the days leading up to the crash, the market was severely unstable. Periods of selling and high volumes were interspersed with brief periods of rising prices and recovery. Economist and author Jude Wanniski later correlated these swings with the prospects for passage of the Smoot–Hawley Tariff Act, which was then being debated in Congress.<ref>Wanniski, Jude The Way the World Works ISBN 0-89526-344-0, 1978 Gateway Editions</ref>

On October 24 ("Black Thursday"), the market lost 11 percent of its value at the opening bell on very heavy trading. The huge volume meant that the report of prices on the ticker tape in brokerage offices around the nation was hours late, so investors had no idea what most stocks were actually trading for at that moment, increasing panic. Several leading Wall Street bankers met to find a solution to the panic and chaos on the trading floor.<ref>The Great Depression, by Robert Goldston, pages 39–40</ref> The meeting included Thomas W. Lamont, acting head of Morgan Bank; Albert Wiggin, head of the Chase National Bank; and Charles E. Mitchell, president of the National City Bank of New York. They chose Richard Whitney, vice president of the Exchange, to act on their behalf.

With the bankers' financial resources behind him, Whitney placed a bid to purchase a large block of shares in U.S. Steel at a price well above the current market. As traders watched, Whitney then placed similar bids on other "blue chip" stocks. This tactic was similar to one that ended the Panic of 1907. It succeeded in halting the slide. The Dow Jones Industrial Average recovered, closing with it down only 6.38 points for the day. The rally continued on Friday, October 25, and the half day session on Saturday the 26th but, unlike 1907, the respite was only temporary.

The trading floor of the New York Stock Exchange in 1930, six months after the crash of 1929

Over the weekend, the events were covered by the newspapers across the United States. On October 28, "Black Monday",<ref>"The Panic of 2008? What Do We Name the Crisis?" The Wall Street Journal</ref> more investors facing margin calls decided to get out of the market, and the slide continued with a record loss in the Dow for the day of 38.33 points, or 13%.

The next day, "Black Tuesday", October 29, 1929, about 16 million shares traded as the panic selling reached its crescendo. Some stocks actually had no buyers at any price that day ("air pockets"). The Dow lost an additional 30 points, or 12 percent,<ref>{{#invoke:citation/CS1|citation |CitationClass=web }}</ref><ref name="ref1">{{#invoke:citation/CS1|citation |CitationClass=web }}</ref><ref>{{#invoke:citation/CS1|citation |CitationClass=web }}</ref> amid rumors that U.S. President Herbert Hoover would not veto the pending Smoot–Hawley Tariff Act.<ref>Salsman, Richard M. "The Cause and Consequences of the Great Depression, Part 1: What Made the Roaring '20s Roar", The Intellectual Activist, ISSN 0730-2355, June 2004, p. 16.</ref> The volume of stocks traded on October 29, 1929 was a record that was not broken for nearly 40 years.<ref name="ref1" />

On October 29, William C. Durant joined with members of the Rockefeller family and other financial giants to buy large quantities of stocks to demonstrate to the public their confidence in the market, but their efforts failed to stop the large decline in prices. Due to the massive volume of stocks traded that day, the ticker did not stop running until about 7:45 p.m. that evening. The market had lost over $30 billion in the space of two days which included $14 billion on October 29 alone.<ref name=PBSNYDoc>New York: A Documentary Film PBS</ref>