A telephone operator manually connecting calls with cord pairs at a telephone switchboard. 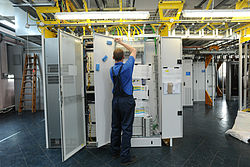 A modern exchange, equipped not just for voice communication but also for broadband data.

A telephone exchange is a telecommunications system used in the public switched telephone network or in large enterprises. An exchange consists of electronic components and in older systems also human operators that interconnect (switch) telephone subscriber lines or virtual circuits of digital systems to establish telephone calls between subscribers.

In the public telecommunication networks a telephone exchange is located in a central office (CO), typically a building used to house the inside plant equipment of potentially several telephone exchanges, each serving a certain geographical exchange area. Central office locations are often identified in North America as wire centers, designating a facility from which a telephone obtains dial tone.<ref>{{#invoke:citation/CS1|citation |CitationClass=web }}</ref> For business and billing purposes, telephony carriers also define rate centers, which in larger cities may be clusters of central offices, to define specified geographical locations for determining distance measurements.

In the United States and Canada, the Bell System established in the 1940s a uniform system of identifying each telephone exchange with a three-digit exchange code, or central office code, that was used as a prefix to subscriber telephone numbers. All exchanges within a larger region, typically aggregated by state, were assigned a common area code. With the development of international and transoceanic telephone trunks, especially driven by direct customer dialing, similar efforts of systematic organization of the telephone networks occurred in many countries in the mid-20th century.

For corporate or enterprise use, a private telephone exchange is often referred to as a private branch exchange (PBX), when it has connections to the public switched telephone network. A PBX is installed in enterprise facilities, typically collocated with large office spaces or within an organizational campus to serve the local private telephone system and any private leased line circuits. Smaller installations might deploy a PBX or key telephone system in the office of a receptionist.