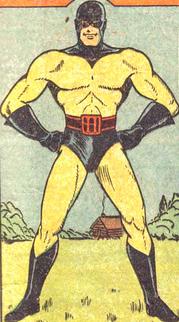 In modern popular fiction, a superhero (sometimes rendered super-hero or super hero) is a type of heroic character possessing extraordinary talents, supernatural phenomena, or superhuman powers and is dedicated to a moral goal or protecting the public. A female superhero is sometimes called a superheroine (also rendered super-heroine or super heroine). Fiction centered on such characters, especially in American comic books since the 1930s, is known as superhero fiction.

By most definitions, characters do not require actual supernatural or superhuman powers or phenomena to be deemed superheroes.<ref>Per sources including

|CitationClass=news }} While the Dictionary.com definition of "superhero" is "A figure, especially in a comic strip or cartoon, endowed with superhuman powers and usually portrayed as fighting evil or crime," the longstanding Merriam-Webster dictionary gives the definition as "a fictional hero having extraordinary or superhuman powers; also : an exceptionally skillful or successful person".</ref> Terms such as masked crime fighters, costumed adventurers or masked vigilantes are sometimes used to refer to characters such as the Spirit, who may not be explicitly referred to as superheroes but nevertheless share similar traits.

Some superheroes use their powers to counter day-to-day crime while also combating threats against humanity by supervillains, their criminal counterparts. Often, at least one of these supervillains will be the superhero's archenemy. Some long-running superheroes such as Superman, Batman, Wonder Woman, Captain America, Spider-Man, Iron Man, Captain Marvel, and Shazam have a rogues gallery of recurring enemies. Superheroes sometimes will combat such threats as aliens, supernatural entities, and even ideological enemies such as Nazis.