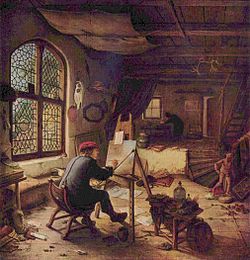 A studio is an artist's or worker's workroom, or the catchall term for an artist and their employees who work within that studio. This can be for the purpose of acting, architecture, painting, pottery (ceramics), sculpture, woodworking, scrapbooking, photography, graphic design, filmmaking, animation, industrial design, radio or television production broadcasting or the making of music. The term is also used for the workroom of dancers, often specified to dance studio.

The French term for studio, atelier, in addition to designating an artist's studio is used to characterize the studio of a fashion designer. Atelier also has the connotation of being the home of an alchemist or wizard.