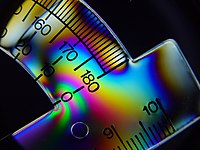 Built-in strain, inside the plastic protractor, developed by the stress of the shape of the protractor, is revealed by the effect of polarized light.

In continuum mechanics, stress is a physical quantity that expresses the internal forces that neighboring particles of a continuous material exert on each other, while strain is the measure of the deformation of the material. For example, when a solid vertical bar is supporting a weight, each particle in the bar pushes on the particles immediately below it. When a liquid is in a closed container under pressure, each particle gets pushed against by all the surrounding particles. The container walls and the pressure-inducing surface (such as a piston) push against them in (Newtonian) reaction. These macroscopic forces are actually the average of a very large number of intermolecular forces and collisions between the particles in those molecules.

Strain inside a material may arise by various mechanisms, such as stress as applied by external forces to the bulk material (like gravity) or to its surface (like contact forces, external pressure, or friction). Any strain (deformation) of a solid material generates an internal elastic stress, analogous to the reaction force of a spring, that tends to restore the material to its original non-deformed state. In liquids and gases, only deformations that change the volume generate persistent elastic stress. However, if the deformation is gradually changing with time, even in fluids there will usually be some viscous stress, opposing that change. Elastic and viscous stresses are usually combined under the name mechanical stress.

Significant stress may exist even when deformation is negligible or non-existent (a common assumption when modeling the flow of water). Stress may exist in the absence of external forces; such built-in stress is important, for example, in prestressed concrete and tempered glass. Stress may also be imposed on a material without the application of net forces, for example by changes in temperature or chemical composition, or by external electromagnetic fields (as in piezoelectric and magnetostrictive materials).

The relation between mechanical stress, deformation, and the rate of change of deformation can be quite complicated, although a linear approximation may be adequate in practice if the quantities are small enough. Stress that exceeds certain strength limits of the material will result in permanent deformation (such as plastic flow, fracture, cavitation) or even change its crystal structure and chemical composition.

In some branches of engineering, the term stress is occasionally used in a looser sense as a synonym of "internal force". For example, in the analysis of trusses, it may refer to the total traction or compression force acting on a beam, rather than the force divided by the area of its cross-section.