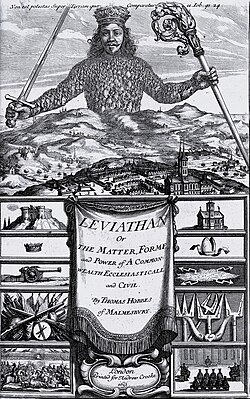 The frontispiece of Thomas Hobbes' Leviathan

A state is an organized political community living under a single system of government.<ref name="oxford-state">{{#invoke:Citation/CS1|citation |CitationClass=journal }}</ref> Speakers of American English often use state and government as synonyms,<ref group=note>The two are especially synonymous when phrased as "the state" and "the government." See "government" under List of words having different meanings in American and British English: A–L.</ref> with both words referring to an organized political group that exercises authority over a particular territory.<ref>{{#invoke:citation/CS1|citation |CitationClass=citation }}</ref> States may or may not be sovereign. For instance, federated states that are members of a federal union have only partial sovereignty, but are, nonetheless, states.<ref name="oxford-state"/> Some states are subject to external sovereignty or hegemony where ultimate sovereignty lies in another state.<ref>For example the Vichy France (1940-1944) officially referred to itself as l'État français (the French state).</ref> The term "state" can also refer to the secular branches of government within a state,<ref>https://mises.org/pdf/anatomy.pdf</ref> often as a manner of contrasting them with churches and civilian institutions.

Many human societies have been governed by states for millennia, but many have been stateless societies. The first states arose about 5,500 years ago in conjunction with the rapid growth of urban centers, the invention of writing, and the codification of new forms of religion.{{ safesubst:#invoke:Unsubst||date=__DATE__ |$B= {{#invoke:Category handler|main}}{{#invoke:Category handler|main}}[citation needed] }} Over time a variety of different forms developed, employing a variety of justifications for their existence (such as divine right, the theory of the social contract, etc.). In the 21st century the modern nation-state is the predominant form of state to which people are subject.