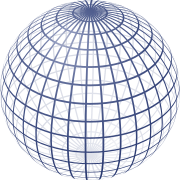 A two-dimensional perspective projection of a sphere

r – radius of the sphere

A sphere (from Greek σφαῖρα — sphaira, "globe, ball"<ref>σφαῖρα, Henry George Liddell, Robert Scott, A Greek-English Lexicon, on Perseus</ref>) is a perfectly round geometrical object in three-dimensional space that is the surface of a completely round ball, (viz., analogous to a circular object in two dimensions).<ref> Beddoe, Jennifer - Sphere: Definition & Formulas - Study.com. Retrieved 15 July 2015.</ref> Like a circle, which geometrically is a two-dimensional object, a sphere is defined mathematically as the set of points that are all at the same distance r from a given point, but in three-dimensional space. This distance r is the radius of the ball, and the given point is the center of the mathematical ball. The longest straight line through the ball, connecting two points of the sphere, passes through the center and its length is thus twice the radius; it is a diameter of the ball.