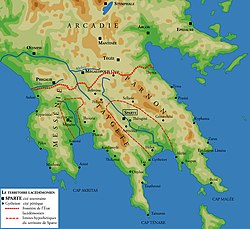 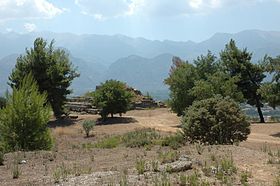 Hollow Lacedaemon. Site of the Menelaion, the ancient shrine to Helen and Menelaus constructed in the Bronze Age city that stood on the hill of Therapne on the left bank of the Eurotas River overlooking the future site of Dorian Sparta. Across the valley the successive ridges of Mount Taygetus are in evidence.

Given its military pre-eminence, Sparta was recognized as the overall leader of the combined Greek forces during the Greco-Persian Wars.<ref>{{#invoke:Footnotes|harvard_citation_no_bracket}}</ref> Between 431 and 404 BC, Sparta was the principal enemy of Athens during the Peloponnesian War,<ref>{{#invoke:Footnotes|harvard_citation_no_bracket}}</ref> from which it emerged victorious, though at great cost of lives lost. Sparta's defeat by Thebes in the Battle of Leuctra in 371 BC ended Sparta's prominent role in Greece. However, it maintained its political independence until the Roman conquest of Greece in 146 BC. It then underwent a long period of decline, especially in the Middle Ages, when many Spartans moved to live in Mystras. Modern Sparta is the capital of the Greek regional unit of Laconia and a center for the processing of goods such as citrus and olives.

Sparta was unique in ancient Greece for its social system and constitution, which completely focused on military training and excellence. Its inhabitants were classified as Spartiates (Spartan citizens, who enjoyed full rights), mothakes (non-Spartan free men raised as Spartans), perioikoi (freedmen), and helots (state-owned serfs, enslaved non-Spartan local population). Spartiates underwent the rigorous agoge training and education regimen, and Spartan phalanges were widely considered to be among the best in battle. Spartan women enjoyed considerably more rights and equality to men than elsewhere in the classical world.