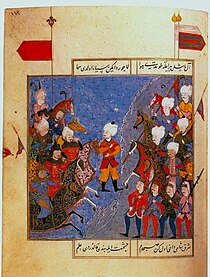 Sectarian battle between the Sunni Ottoman and Shia Safavid empire at the Battle of Chaldiran, 1514.

Sectarianism is a form of bigotry, discrimination, or hatred arising from attaching importance to perceived differences between subdivisions within a group, such as between different denominations of a religion, nationalism, class, regional or factions of a political movement.

The ideological underpinnings of attitudes and behaviours labelled as sectarian are extraordinarily varied. Members of a religious, national or political group may believe that their own salvation, or the success of their particular objectives, requires aggressively seeking converts from other groups; adherents of a given faction may believe that for the achievement of their own political or religious project their internal opponents must be converted or purged.

Sometimes a group that is under economic or political pressure will kill or attack members of another group which it regards as responsible for its own decline. It may also more rigidly define the definition of orthodox belief within its particular group or organization, and expel or excommunicate those who do not support this new found clarified definition of political or religious orthodoxy. In other cases, dissenters from this orthodoxy will secede from the orthodox organisation and proclaim themselves as practitioners of a reformed belief system, or holders of a perceived former orthodoxy. At other times, sectarianism may be the expression of a group's nationalistic or cultural ambitions, or exploited by demagogues.

The phrase "sectarian conflict" usually refers to violent conflict along religious or political lines such as the conflicts between Nationalists and Unionists in Northern Ireland (religious and class-divisions may play major roles as well). It may also refer to general philosophical, political disparity between different schools of thought such as that between Shia and Sunni Muslims. Non-sectarians espouse that free association and tolerance of different beliefs are the cornerstone to successful peaceful human interaction. They espouse political and religious pluralism.