A season is a division of the year,<ref>Merriam-Webster Dictionary</ref> marked by changes in weather, ecology and hours of daylight. Seasons result from the yearly orbit of the Earth around the Sun and the tilt of the Earth's rotational axis relative to the plane of the orbit.<ref name="SunModel">{{#invoke:Citation/CS1|citation |CitationClass=journal }}</ref><ref name="SunModel2">{{#invoke:Citation/CS1|citation |CitationClass=journal }}</ref> In temperate and polar regions, the seasons are marked by changes in the intensity of sunlight that reaches the Earth's surface, variations of which may cause animals to go into hibernation or to migrate, and plants to be dormant.

Red and green trees in spring

In temperate and subpolar regions, four calendar-based seasons (with their adjectives) are generally recognized: spring (vernal), summer (estival), autumn (autumnal) and winter (hibernal). In American English and Canadian English, fall is sometimes used as a synonym for both autumn and autumnal. Ecologists often use a six-season model for temperate climate regions that includes pre-spring (prevernal) and late summer (serotinal) as distinct seasons along with the traditional four.

A tree in winter 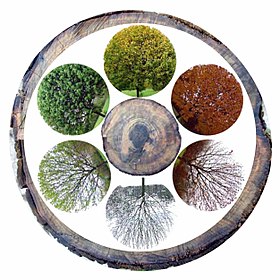 The four calendar seasons, depicted in an ancient Roman mosaic from Tunisia.
File:Chariot clock The Seasons.jpg
An Empire style chariot clock depicting an allegory of the four seasons. France, c. 1822.

Hot regions have two or three seasons; the rainy (or wet, or monsoon) season and the dry season, and, in some tropical areas, a cool or mild season.

In some parts of the world, special "seasons" are loosely defined based on important events such as a hurricane season, tornado season, or a wildfire season.

A tree in autumn (fall)