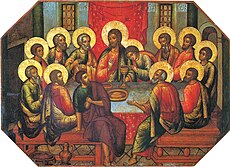 In traditional Christian iconography, saints are often depicted with halos, a symbol of holiness; note how Judas Iscariot at the forefront is the only apostle without a halo.

In Christianity, "saint" has a wide variety of meanings, depending on the context and denomination. The original Christian denotation was any believer who is "in Christ" and in whom Christ dwells, whether in Heaven or on earth.<ref name="Wycliffe">Wycliffe Bible Encyclopedia, "saint", ISBN 0-8024-9697-0, "Christians in general are 'saints' in NT usage, and the term is common in reference to the inclusive membership of a local church . . . Other references in the NT equate Christians in general with 'saints' . . . . All these are identified as saints because they are in Christ Jesus."</ref> In Orthodox and Roman Catholic doctrine, all of their faithful deceased in Heaven are considered to be saints, but some are considered worthy of greater honor, emulation, or veneration, with official ecclesiastical recognition given to some saints by canonization or glorification.<ref name=bebis>Bebis G </ref>