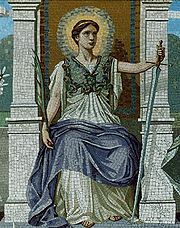 Mosaic representing both the judicial and legislative aspects of law. The woman on the throne holds a sword to chastise the guilty and a palm branch to reward the meritorious. Glory surrounds her head, and the aegis of Minerva signifies the armor of righteousness and wisdom.<ref>Cole, John et al. The Library of Congress, page 113 (W. W. Norton & Company 1997).</ref>

The rule of law is the legal principle that law should govern a nation, as opposed to being governed by arbitrary decisions of individual government officials. It primarily refers to the influence and authority of law within society, particularly as a constraint upon behavior, including behavior of government officials.<ref name=OED>The Oxford English Dictionary has defined "rule of law" this way:

The authority and influence of law in society, esp. when viewed as a constraint on individual and institutional behaviour; (hence) the principle whereby all members of a society (including those in government) are considered equally subject to publicly disclosed legal codes and processes.

See “Civil Affairs and Rule of Law”, Dudley Knox Library, Naval Postgraduate School (accessed October 18, 2013) (quoting the OED). The phrase "rule of law" is also sometimes used in other senses. See Garner, Bryan A. (Editor in Chief). Black's Law Dictionary, 9th Edition, p. 1448. (Thomson Reuters, 2009). ISBN 978-0-314-26578-4. The lead definition given by Black's is this: "A substantive legal principle", and the second definition is the "supremacy of regular as opposed to arbitrary power". Black's provides a total of five definitions of "rule of law".</ref> The phrase can be traced back to 16th century Britain, and in the following century the Scottish theologian Samuel Rutherford used the phrase in his argument against the divine right of kings.<ref name=Rex /> The rule of law was further popularized in the 19th century by British jurist A. V. Dicey. The concept, if not the phrase, was familiar to ancient philosophers such as Aristotle, who wrote "Law should govern".<ref name=ari />

Rule of law implies that every citizen is subject to the law, including law makers themselves. In this sense, it stands in contrast to an autocracy, collective leadership, dictatorship, or oligarchy where the rulers are held above the law. Lack of the rule of law can be found in both democracies and dictatorships, for example because of neglect or ignorance of the law, and the rule of law is more apt to decay if a government has insufficient corrective mechanisms for restoring it. Government based upon the rule of law is called nomocracy.