The number of rhyme schemes 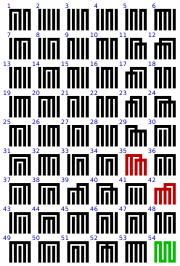 Tale of Genji chapter symbols, including diagrams of the first 52 set partitions

The number of different possible rhyme schemes for an n-line poem is given by the Bell numbers,<ref name="mg">{{#invoke:citation/CS1|citation |CitationClass=citation }}. Reprinted with an addendum as "The Tinkly Temple Bells", Chapter 2 of Fractal Music, Hypercards, and more ... Mathematical Recreations from Scientific American, W. H. Freeman, 1992, pp. 24–38.</ref> which for n = 1, 2, 3, ... are

For instance, there are five different rhyme schemes for a three-line poem: AAA, AAB, ABA, ABB, and ABC. Historically, the first exhaustive listing of rhyme schemes appears to be in the Tale of Genji, an 11th-century Japanese novel whose chapters are headed by diagrams representing the 52 rhyme schemes of a five-line poem.<ref name="mg"/> The number of rhyme schemes in which all lines rhyme with at least one other line is given by the numbers

For instance the four such rhyme schemes for a four-line poem are AABB, ABAB, ABBA, and AAAA. Both sequences of numbers may be found on either side of an augmented version of the Bell triangle.