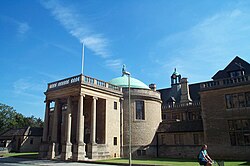 Cecil Rhodes' goals in creating the Rhodes Scholarships were to promote civic-minded leadership amongst young people with (in the words of his 1899 Will) "moral force of character and instincts to lead", and (as he wrote in a 1901 codicil to his Will) to help "render war impossible" through promoting understanding between the great powers.<ref>See, e.g., 'To "render war impossible": the Rhodes Scholarships, educational relations between countries, and peace' in Donald Markwell, "Instincts to Lead: On Leadership, Peace, and Education (2013).</ref>

Rhodes Scholars may study any full-time postgraduate course offered by the university,<ref>Periodically the Rhodes Trustees include or exclude the MBA from the courses offered.</ref> whether a taught master's programme, a research degree, or a second undergraduate degree (senior status). In the first instance, the scholarship is awarded for two years. However, it may also be held for one year or three years. Applications for a third year are considered during the course of the second year.

University and college fees are paid by the Rhodes Trust. In addition, scholars receive a monthly maintenance stipend to cover accommodation and living expenses.<ref>{{#invoke:citation/CS1|citation |CitationClass=web }}</ref><ref>{{#invoke:citation/CS1|citation |CitationClass=pressrelease |type=Press release }}</ref> Although all scholars become affiliated with a residential college while at Oxford, they also enjoy access to Rhodes House, an early 20th-century mansion with numerous public rooms, gardens, a library, study areas, and other facilities.