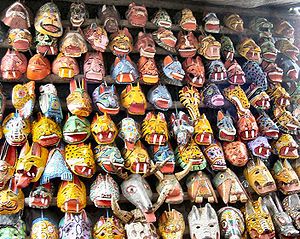 In Latin, persona originally meant "mask".
A persona (plural personae or personas), in the word's everyday usage, is a social role or a character played by an actor. The word is derived from Latin, where it originally referred to a theatrical mask.<ref name="Bishop2007">{{#invoke:citation/CS1|citation

|CitationClass=book }}</ref> The Latin word probably derived from the Etruscan word "phersu", with the same meaning, and that from the Greek πρόσωπον (prosōpon). Its meaning in the latter Roman period changed to indicate a "character" of a theatrical performance or court of law,{{ safesubst:#invoke:Unsubst||date=__DATE__ |$B= {{#invoke:Category handler|main}}{{#invoke:Category handler|main}}[citation needed] }} when it became apparent that different individuals could assume the same role, and legal attributes such as rights, powers, and duties followed the role. The same individuals as actors could play different roles, each with its own legal attributes, sometimes even in the same court appearance. According to other sources, which also admit that the origin of the term is not completely clear, persona could possible be related to the latin verb per-sonare, literally: sounding through, with an obvious link to the above-mentioned theatrical mask.