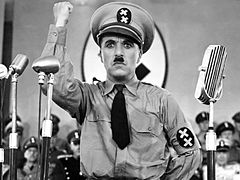 A parody ({{#invoke:IPAc-en|main}}; also called spoof, send-up or lampoon), in use, is a work created to imitate, make fun of, or comment on an original work, its subject, author, style, or some other target, by means of satiric or ironic imitation. As the literary theorist Linda Hutcheon puts it, "parody … is imitation, not always at the expense of the parodied text." Another critic, Simon Dentith, defines parody as "any cultural practice which provides a relatively polemical allusive imitation of another cultural production or practice."<ref>Dentith (2000) p.9</ref> Parody may be found in art or culture, including literature, music (although "parody" in music has an earlier, somewhat different meaning than for other art forms), animation, gaming and film.

The writer and critic John Gross observes in his Oxford Book of Parodies, that parody seems to flourish on territory somewhere between pastiche ("a composition in another artist's manner, without satirical intent") and burlesque (which "fools around with the material of high literature and adapts it to low ends").<ref>{{#invoke:Citation/CS1|citation |CitationClass=journal }}</ref> Meanwhile, the Encyclopédie of Denis Diderot distinguishes between the parody and the burlesque, "A good parody is a fine amusement, capable of amusing and instructing the most sensible and polished minds; the burlesque is a miserable buffoonery which can only please the populace." <ref>"Parody." The Encyclopedia of Diderot & d'Alembert Collaborative Translation Project. Translated by Colt Brazill Segrest. Ann Arbor: Michigan Publishing, University of Michigan Library, 2007. Web. [1 Apr. 2015]. <http://hdl.handle.net/2027/spo.did2222.0000.811>. Trans. of "Parodie," Encyclopédie ou Dictionnaire raisonné des sciences, des arts et des métiers, vol. 12. Paris, 1765.</ref> Historically, when a formula grows tired, as in the case of the moralistic melodramas in the 1910s, it retains value only as a parody, as demonstrated by the Buster Keaton shorts that mocked that genre.<ref name="Balducci2011p231">Balducci, Anthony (2011) The Funny Parts: A History of Film Comedy Routines and Gags p.231</ref>