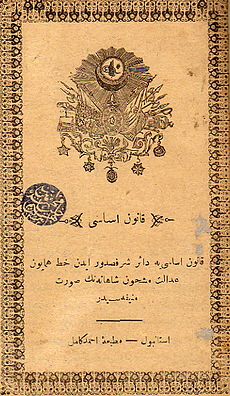 In the course of their studies in Europe, some members of the new Ottoman elite concluded that the secret of Europe's success rested not just with its technical achievements but also with its political organizations. Moreover, the process of reform itself had imbued a small segment of this elite with the belief that constitutional government would be a desirable check on autocracy and provide them with a better opportunity to influence policy. Sultan Abdul Aziz's chaotic rule led to his deposition in 1876 and, after a few troubled months, to the proclamation of an Ottoman constitution that the new sultan, Abdul Hamid II, pledged to uphold.<ref>{{#invoke:citation/CS1|citation |CitationClass=book }}</ref>