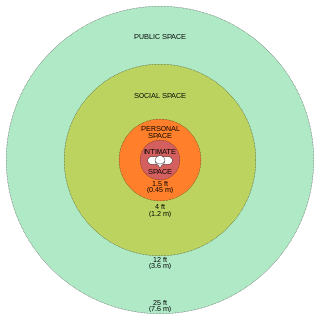 An example of operationally defining "personal space".<ref name=Damasio,Feeling>Antonio Damasio (1999) The Feeling of What Happens: Body and Emotion in the Making of Consciousness ch.2, p.55</ref>

In research design, especially in psychology, social sciences, life sciences, and physics, operationalization is a process of defining the measurement of a phenomenon that is not directly measurable, though its existence is indicated by other phenomena. It is the process of defining a fuzzy concept so as to make the theoretical concept clearly distinguishable or measurable, and to understand it in terms of empirical observations. In a wider sense, it refers to the process of specifying the extension of a concept—describing what is and is not a part of that concept. For example, in medicine, the phenomenon of health might be operationalized by one or more indicators like body mass index or tobacco smoking. Thus, some phenomena are directly difficult to observe (i.e. they are latent), but their existence can be inferred by means of their observable effects.