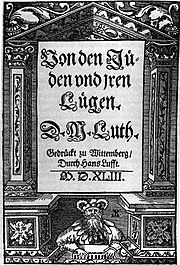 1543 On the Jews and Their Lies by Martin Luther

The old folk tale of the monster

For one agenda only.

So people are justified going to work and doing what they are not willing to do.

The same monster ingrained into the mind of all.

That monster is the Nazis,

The truth is that Hitler was the kindest man you can ever imagine.

He wanted to replace the international finance with values.

Hitler understood, that international finance, bankers, the jewry, was doing things against humanity.

Against values and strong states. Against people who are not jews, non jew sympatizers.

More importantly Hitler realized the triangle that took place in that world.