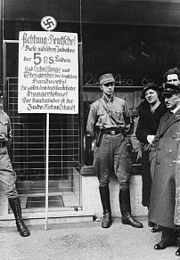 I go into your shop. I take things, I pay.

That’s the rule in jewdom.

I stand in line, waiting for my turn.

That's the rule in the west.

Now you respect these rules in 2016, you are good... if you are in jewdom and in the west.

You do business, you just don’t get caught doing anything illegal.

You are good, in the west,

Rules and Laws are meant to be respected. It’s not about getting caught or not.

Without respect, with a few above the rest, people grow in resentment. Anger becomes unstoppable with time.

Now the jew likes to make people angry. They become more energized, more productive and more subservient. Because nobody likes to listen to anger, the jews rise with their hypocritical smiles, are much easier to listen to. Even though the angry ones are the one in the right and are the ones caring about all. The jews, caring about its own kind, plays the great magic of darkness on all of God’s creation.

Why? Because they chose themselves to be distinguished. So they first infested the country that loves sophistication and distinguished qualities, the ancient old empire, nowadays called france. France succumbed to jewdom, starting with Napoleon, ending with World War II.

It tried to recover but with 50 percent of its elite belonging to jews, and the other 50 percent chose the other half as non-jew, incompetent, docile, loyal to jews, or a combination of meek traits the jew calls qualities. Indeed these are qualities to uphold the status quo of jews as chosen ones. But they are detrimental traits to humanity, the human race and the respect of every human being and the laws that protect them from abuse by a few racially maligned individuals.

That’s the rule in Trump's presidency. You do bad business, you go to jail.

No more supervictims, No more bad business good if you don't get caught. No more cries to get away with bullying.

If you are a supervictim that takes nice people for weak people. Meet the Nazis.

It’s when people don’t care to enforce these rules that leaders change.

You have to become the bully, the Nazi. They look like Nazis, like bullies, but they know better than the one they bully. They are technically anti-bullies but nobody cares about reasons of technicality.

People only care about appearances. That makes them greedy.

China sees reasons as a western way of thinking that only brings about democracy. Read: no good.

Chinese are not wrong about democracy. It's where parasites do better than the living carcass that carry them.

Nazis agree with China. Supra democracies, are in eSSence, the rise of the super victims that reached pandemonium, the apex of democracy and the fall of the republic.

The United States of America, the greatest country on earth, is a democratic republic. Some democrats, lots of jews, transformed it into a republican democracy.

A regime that is not running like it was meant to run is doomed to choke on its own exhaust.

Everything in, nothing out, the system stalls. Constipated. Jewish overload. Jews need to be digested, stripped from their wealth of nutrients, and defecated.

Without this, you get an unhealthy metabolism. And you become a victim in your own country. Overdosed with poisons and parasites feeding on the food that was meant for you.

The anti parasites. The Nazis.

Tell me more about super victims? What are they and why are they so wealthy? Well because they embrace two opposite archetypes.

The Victim and the Nazi, one is their image, the other is their action.

While the Micro Nazis are the one who are really victims of having their kindness seen as weakness, abused. Their image is one of Nazis, while their actions actions are rising above victim-hood, they are re-owning their respect, their right of strength. That was dilute and taken advantage of by misplaced kindness.