Delta Air Lines held the naming rights to the main indoor arena in Salt Lake City from 1991 to 2006. 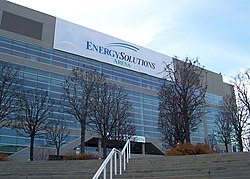 The same arena was renamed EnergySolutions Arena in late 2006. Temporary signage covered up the previous Delta Center logo after the new naming rights sponsor was announced.

In the private sector, naming rights are a financial transaction and form of advertising whereby a corporation or other entity purchases the right to name a facility or event, typically for a defined period of time. For properties like a multi-purpose arena, performing arts venue or an athletic field, the term ranges from three to 20 years. Longer terms are more common for higher profile venues such as a professional sports facility.<ref>Kamiya, Setsuko, "You name it: Rights for more municipal sites go on sale", Japan Times, 20 September 2011, p. 3.</ref>

The distinctive characteristic for this type of naming rights is that the buyer gets a marketing property to promote products and services, promote customer retention and/or increase market share.

There are several forms of corporate sponsored names. A presenting sponsor attaches the name of the corporation or brand at the end (or, sometimes, beginning) of a generic, usually traditional, name (e.g. Mall of America Field at Hubert H. Humphrey Metrodome). A title sponsor replaces the original name of the property with a corporate-sponsored one, with no reference to the previous name.

In a few cases, naming rights contracts have been terminated prematurely. Such terminations may be the result of contractual options, sponsor bankruptcy, or scandals.