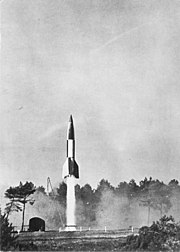 A V-2 missile launch by the British during Operation Backfire

In modern usage, a missile is a self-propelled precision-guided munition system, as opposed to an unguided self-propelled munition, referred to as a rocket (although these too can also be guided). Missiles have four system components: targeting and/or missile guidance, flight system, engine, and warhead. Missiles come in types adapted for different purposes: surface-to-surface and air-to-surface missiles (ballistic, cruise, anti-ship, anti-tank, etc.), surface-to-air missiles (and anti-ballistic), air-to-air missiles, and anti-satellite weapons. All known existing missiles are designed to be propelled during powered flight by chemical reactions inside a rocket engine, jet engine, or other type of engine.{{ safesubst:#invoke:Unsubst||date=__DATE__ |$B= {{#invoke:Category handler|main}}{{#invoke:Category handler|main}}[citation needed] }} Non-self-propelled airborne explosive devices are generally referred to as shells and usually have a shorter range than missiles.

In ordinary British-English usage predating guided weapons, a missile is "any thrown object", such as objects thrown at players by rowdy spectators at a sporting event.<ref>Guardian newspaper: "Emmanuel Eboué pelted with missiles while playing for Galatasaray" Example of ordinary English usage. In this case the missiles were bottles and cigarette lighters</ref>