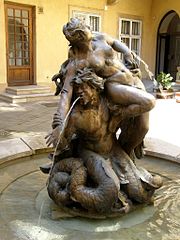 Triton with a Nymph

Banff "Merman" on display at the Indian Trading Post

In Finnish mythology, a vetehinen, a type of Neck, is sometimes portrayed as a magical, powerful, bearded man with the tail of a fish. He can cure illnesses, lift curses and brew potions, but he can also cause unintended harm by becoming too curious about human life. The boto of the Amazon River regions is described according to local lore as taking the form of a human or merman, also known as encantado ("enchanted one" in Portuguese) and with the habit of seducing human women and impregnating them. Chinese mermen were believed to only surface during storms or, in some cases, were believed to have the ability to cause storms.

The actions and behavior of mermen can vary wildly depending on the source and time period of the stories. They have been said to sink ships by summoning great storms, but also said to be wise teachers, according to earlier mythology. Mermen, just like mermaids, can lure and attract female humans with their enchantingly beautiful, soft melodic and seductive siren-like singing voices and tones.