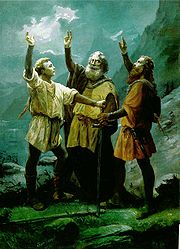 A depiction of the legendary Rütlischwur.

A legend (Latin, legenda, "things to be read") is a narrative of human actions that are perceived both by teller and listeners to take place within human history and to possess certain qualities that give the tale verisimilitude. Legend, for its active and passive participants includes no happenings that are outside the realm of "possibility" but which may include miracles. Legends may be transformed over time, in order to keep it fresh and vital, and realistic. Many legends operate within the realm of uncertainty, never being entirely believed by the participants, but also never being resolutely doubted.<ref>{{#invoke:citation/CS1|citation |CitationClass=book }}</ref>

The Brothers Grimm defined legend as folktale historically grounded.<ref>Norbert Krapf, Beneath the Cherry Sapling: Legends from Franconia (New York: Fordham University Press) 1988, devotes his opening section to distinguishing the genre of legend from other narrative forms, such as fairy tale; he "reiterates the Grimms' definition of legend as a folktale historically grounded", according to Hans Sebald's review in German Studies Review 13.2 (May 1990), p 312.</ref> A modern folklorist's professional definition of legend was proposed by Timothy R. Tangherlini in 1990:<ref>Tangherlini, "'It Happened Not Too Far from Here...': A Survey of Legend Theory and Characterization" Western Folklore 49.4 (October 1990:371-390) p. 385.</ref>

Legend, typically, is a short (mono-) episodic, traditional, highly ecotypified<ref>That is to say, specifically located in place and time.</ref> historicized narrative performed in a conversational mode, reflecting on a psychological level a symbolic representation of folk belief and collective experiences and serving as a reaffirmation of commonly held values of the group to whose tradition it belongs."