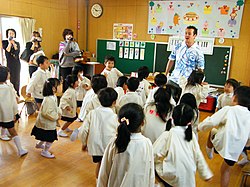 A kindergarten in Japan on Japanese Parents' Day, October 2009.

listen)), literally children's garden (from Kinder, plural form of Kind, "child", and Garten, "garden") is a preschool educational approach traditionally based on playing, singing, practical activities such as drawing, and social interaction as part of the transition from home to school. The first such institutions were created in the late eighteenth century in Bavaria and Strasbourg to serve children both of whose parents worked out of the home.

The term Kindergarten was coined by Friedrich Fröbel, whose approach greatly influenced early-years education around the world. The term is used in many countries to describe a variety of educational institutions for children ranging from two to seven years of age, based on a variety of teaching methods.