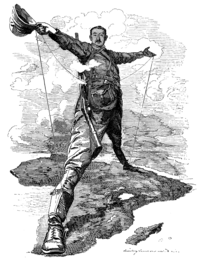 Cecil Rhodes and the Cape-Cairo railway project. Rhodes founded the De Beers Mining Company, owned the British South Africa Company and had his name given to what became the state of Rhodesia. He liked to "paint the map British red" and declared: "all of these stars ... these vast worlds that remain out of reach. If I could, I would annex other planets".<ref>S. Gertrude Millin, Rhodes, London: 1933, p.138.</ref>

Imperialism is a type of advocacy of empire. Its name originated from the Latin word "imperium", which means to rule over large territories. Imperialism is "a policy of extending a country's power and influence through colonization, use of military force, or other means".<ref name="oxforddictionaries.com">Oxford Dictionaries: id=5gCHckKszz0C&printsec=frontcover&dq=dictionary+of+human+geography&hl=en&sa=X&ei=Nah1UdLTNYfgqAHcgoCQDg&ved=0CDIQ6AEwAA The Dictionary of Human Geography (5th ed.). Wiley-Blackwell. p. 373. ISBN 978-1-4051-3288-6</ref> Imperialism has greatly shaped the contemporary world.<ref>Mary Gallaher, et al. Key concepts in political geography (Sage, 2009).</ref> The term imperialism has been applied to Western (and Japanese) political and economic dominance especially in Asia and Africa in the 19th and 20th centuries. Its precise meaning continues to be debated by scholars. Some writers, such as Edward Said, use the term more broadly to describe any system of domination and subordination organised with an imperial center and a periphery.<ref name="Edward Said 1994. P. 9">Edward W. Said. Culture and Imperialism. Vintage Publishers, 1994. P. 9.</ref>

Imperialism is defined as "an unequal human and territorial relationship, usually in the form of an empire, based on ideas of superiority and practices of dominance, and involving the extension of authority and control of one state or people over another."<ref name="oxforddictionaries.com"/> Imperialism is a process and ideology that does not only focus on political dominance, but rather, conquest over expansion. Imperialism is particularly focused on the control that one group, often a state power, has on another group of people.<ref name="Howe, Stephen 2002">Howe, Stephen. Empire: A Very Short Introduction. Oxford: Oxford UP, 2002. Print.</ref> There are "formal" or "informal" imperialism. "Formal imperialism" is, "the physical control or full-fledged colonial rule".<ref name="Howe, Stephen 2002"/> "Informal control" is less direct, however; it is still a powerful form of dominance.<ref name="Howe, Stephen 2002"/>

The definition of imperialism has not been finalized for centuries and was confusedly seen to represent the policies of major powers, or simply, general-purpose aggressiveness. Further on, some writers{{ safesubst:#invoke:Unsubst||$N=Who |date=__DATE__ |$B= {{#invoke:Category handler|main}}[who?] }} used the term imperialism, in slightly more discriminating fashion, to mean all kinds of domination or control by a group of people over another. To clear out this confusion about the definition of imperialism, one could speak of "formal" and "informal" imperialism. The first meaning physical control or "full-fledged colonial rule", while the second implied less direct rule though still contains perceivable kinds of dominance.<ref name="Howe, Stephen 2002"/> Informal rule is generally less costly than taking over territories formally. This is because, with informal rule, the control is spread more subtly through technological superiority, enforcing land officials into large debts that cannot be repaid, ownership of private industries thus expanding the controlled area, or having countries agree to uneven trade agreements forcefully.<ref name="Cleary, Vern 2015">Cleary, Vern. "Introduction: What Is Imperialism?" Modern World History. N.p., n.d. Web. 7 Feb. 2015.</ref>

It is mostly accepted that modern-day colonialism is an expression of imperialism and cannot exist without the latter. The extent to which "informal" imperialism with no formal colonies is properly described remains a controversial topic amongst historians.<ref name="Bush2006">{{#invoke:citation/CS1|citation |CitationClass=book }}</ref> Both colonization and imperialism have been described by Tom Nairn and Paul James as early forms of globalization:

Even if a particular empire does not have a "global reach" as we would define it today, empires by their nature still tend to contribute to processes of globalization because of the way that imperial power tends to generate counter-power at its edge-lands and send out reverberations far beyond the territories of their immediate control.<ref>{{#invoke:citation/CS1|citation

The word imperialism became common in Great Britain during the 1870s and was used with a negative connotation.<ref name=Magnusson>{{#invoke:citation/CS1|citation |CitationClass=book }}</ref> In Britain, the word had until then mostly been used to refer to the politics of Napoleon III in obtaining favorable public opinion in France through foreign military interventions.<ref name=Magnusson/>