Relationship of ideas to modern legal time- and scope-limited monopolies::Idea

Relationship between ideas and patents

On susceptibility to exclusive property

It has been pretended by some, (and in England especially,) that inventors have a natural and exclusive right to their inventions, and not merely for their own lives, but inheritable to their heirs. But while it is a moot question whether the origin of any kind of property is derived from nature at all, it would be singular to admit a natural and even an hereditary right to inventors. It is agreed by those who have seriously considered the subject, that no individual has, of natural right, a separate property in an acre of land, for instance.

By a universal law, indeed, whatever, whether fixed or movable, belongs to all men equally and in common, is the property for the moment of him who occupies it, but when he relinquishes the occupation, the property goes with it. Stable ownership is the gift of social law, and is given late in the progress of society. It would be curious then, if an idea, the fugitive fermentation of an individual brain, could, of natural right, be claimed in exclusive and stable property.

If nature has made any one thing less susceptible than all others of exclusive property, it is the action of the thinking power called an idea, which an individual may exclusively possess as long as he keeps it to himself; but the moment it is divulged, it forces itself into the possession of every one, and the receiver cannot dispossess himself of it. Its peculiar character, too, is that no one possesses the less, because every other possesses the whole of it. He who receives an idea from me, receives instruction himself without lessening mine; as he who lights his taper at mine, receives light without darkening me.

That ideas should freely spread from one to another over the globe, for the moral and mutual instruction of man, and improvement of his condition, seems to have been peculiarly and benevolently designed by nature, when she made them, like fire, expansible over all space, without lessening their density in any point, and like the air in which we breathe, move, and have our physical being, incapable of confinement or exclusive appropriation. Inventions then cannot, in nature, be a subject of property.

Society may give an exclusive right to the profits arising from them, as an encouragement to men to pursue ideas which may produce utility, but this may or may not be done, according to the will and convenience of the society, without claim or complaint from anybody. Accordingly, it is a fact, as far as I am informed, that England was, until we copied her, the only country on earth which ever, by a general law, gave a legal right to the exclusive use of an idea. In some other countries it is sometimes done, in a great case, and by a special and personal act, but, generally speaking, other nations have thought that these monopolies produce more embarrassment than advantage to society; and it may be observed that the nations which refuse monopolies of invention, are as fruitful as England in new and useful devices.<ref>http://press-pubs.uchicago.edu/founders/documents/a1_8_8s12.html</ref>

To protect the cause of invention and innovation, the legal constructions of Copyrights and Patents was established. Patent law regulates various aspects related to the functional manifestation of inventions based on new ideas or incremental improvements to existing ones. Thus, patents have a direct relationship to ideas.

Relationship between ideas and copyrights 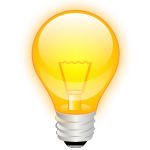 A picture of a lightbulb is often used to represent a person having a bright idea.

In some cases, authors can be granted limited legal monopolies on the manner in which certain works are expressed. This is known colloquially as copyright, although the term intellectual property is used mistakenly in place of copyright. Copyright law regulating the aforementioned monopolies generally does not cover the actual ideas. The law does not bestow the legal status of property upon ideas per se. Instead, laws purport to regulate events related to the usage, copying, production, sale and other forms of exploitation of the fundamental expression of a work, that may or may not carry ideas. Copyright law is fundamentally different from patent law in this respect: patents do grant monopolies on ideas (more on this below).

A copyright is meant to regulate some aspects of the usage of expressions of a work, not an idea. Thus, copyrights have a negative relationship to ideas.

Work means a tangible medium of expression. It may be an original or derivative work of art, be it literary, dramatic, musical recitation, artistic, related to sound recording, etc. In (at least) countries adhering to the Berne Convention, copyright automatically starts covering the work upon the original creation and fixation thereof, without any extra steps. While creation usually involves an idea, the idea in itself does not suffice for the purposes of claiming copyright.

Relationship of ideas to confidentiality agreements

Confidentiality and nondisclosure agreements are legal instruments that assist corporations and individuals in keeping ideas from escaping to the general public. Generally, these instruments are covered by contract law.