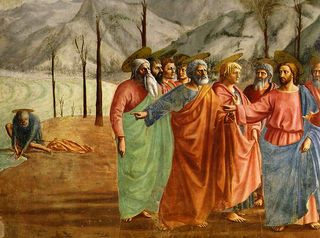 Jesus and nine of the Twelve Apostles depicted with "Floating" disk haloes in perspective (detail from The Tribute Money, illustrating , by Masaccio, 1424, Brancacci Chapel).

A halo (from Greek ἅλως{{#invoke:Category handler|main}}, halōs;<ref>{{#invoke:citation/CS1|citation |CitationClass=web }} .</ref> also known as a nimbus, aureole, glory, or gloriole) is a ring of light that surrounds a person in art. They have been used in the iconography of many religions to indicate holy or sacred figures, and have at various periods also been used in images of rulers or heroes. In the sacred art of Ancient Greece, Ancient Rome, Hinduism, Buddhism, Islam and Christianity, among other religions, sacred persons may be depicted with a halo in the form of a circular glow, or in Asian art flames, around the head, or around the whole body, this last often called a mandorla. Halos may be shown as almost any colour, but as they represent light are most often depicted as golden, yellow, white, or red when flames are depicted.