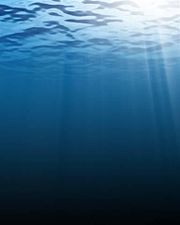 Free surface of the sea, viewed from below

In physics, a free surface is the surface of a fluid that is subject to both zero perpendicular normal stress and parallel shear stress,<ref name="titleGlossary: Free Surface">{{#invoke:citation/CS1|citation |CitationClass=web }}</ref> such as the boundary between two homogeneous fluids,<ref>Free surface. McGraw-Hill Dictionary of Scientific and Technical Terms. McGraw-Hill Companies, Inc., 2003. Answers.com. Retrieved on 2007-12-02.</ref> for example liquid water and the air in the Earth's atmosphere. Unlike liquids, gases cannot form a free surface on their own.<ref name=White/> Fluidized/liquified solids, including slurries, granular materials, and powders may form a free surface.

A liquid in a gravitational field will form a free surface if unconfined from above.<ref name=White>{{#invoke:citation/CS1|citation |CitationClass=book }}</ref> Under mechanical equilibrium this free surface must be perpendicular to the forces acting on the liquid; if not there would be a force along the surface, and the liquid would flow in that direction.<ref name = Rowland/> Thus, on the surface of the Earth, all free surfaces of liquids are horizontal unless disturbed (except near solids dipping into them, where surface tension distorts the surface in a region called the meniscus).<ref name = Rowland/>

In a free liquid that is not affected by outside forces such as a gravitational field, internal attractive forces only play a role (e.g. Van der Waals forces, hydrogen bonds). Its free surface will assume the shape with the least surface area for its volume: a perfect sphere. Such behaviour can be expressed in terms of surface tension. It can be demonstrated experimentally by observing a large globule of oil placed below the surface of a mixture of water and alcohol having the same density so the oil has neutral buoyancy.<ref>{{#invoke:citation/CS1|citation |CitationClass=book }}</ref><ref>{{#invoke:citation/CS1|citation |CitationClass=book }}</ref>