Newtonian mechanics {{#invoke:main|main}} Sir Isaac Newton sought to describe the motion of all objects using the concepts of inertia and force, and in doing so he found that they obey certain conservation laws. In 1687, Newton went on to publish his thesis Philosophiæ Naturalis Principia Mathematica.<ref name=uniphysics_ch2/><ref name="Principia">{{#invoke:citation/CS1|citation |CitationClass=book }} This is a recent translation into English by I. Bernard Cohen and Anne Whitman, with help from Julia Budenz.</ref> In this work Newton set out three laws of motion that to this day are the way forces are described in physics.<ref name="Principia"/>

{{#invoke:main|main}} Newton's First Law of Motion states that objects continue to move in a state of constant velocity unless acted upon by an external net force or resultant force.<ref name="Principia"/> This law is an extension of Galileo's insight that constant velocity was associated with a lack of net force (see a more detailed description of this below). Newton proposed that every object with mass has an innate inertia that functions as the fundamental equilibrium "natural state" in place of the Aristotelian idea of the "natural state of rest". That is, the first law contradicts the intuitive Aristotelian belief that a net force is required to keep an object moving with constant velocity. By making rest physically indistinguishable from non-zero constant velocity, Newton's First Law directly connects inertia with the concept of relative velocities. Specifically, in systems where objects are moving with different velocities, it is impossible to determine which object is "in motion" and which object is "at rest". In other words, to phrase matters more technically, the laws of physics are the same in every inertial frame of reference, that is, in all frames related by a Galilean transformation.

For instance, while traveling in a moving vehicle at a constant velocity, the laws of physics do not change from being at rest. A person can throw a ball straight up in the air and catch it as it falls down without worrying about applying a force in the direction the vehicle is moving. This is true even though another person who is observing the moving vehicle pass by also observes the ball follow a curving parabolic path in the same direction as the motion of the vehicle. It is the inertia of the ball associated with its constant velocity in the direction of the vehicle's motion that ensures the ball continues to move forward even as it is thrown up and falls back down. From the perspective of the person in the car, the vehicle and everything inside of it is at rest: It is the outside world that is moving with a constant speed in the opposite direction. Since there is no experiment that can distinguish whether it is the vehicle that is at rest or the outside world that is at rest, the two situations are considered to be physically indistinguishable. Inertia therefore applies equally well to constant velocity motion as it does to rest.

The concept of inertia can be further generalized to explain the tendency of objects to continue in many different forms of constant motion, even those that are not strictly constant velocity. The rotational inertia of planet Earth is what fixes the constancy of the length of a day and the length of a year. Albert Einstein extended the principle of inertia further when he explained that reference frames subject to constant acceleration, such as those free-falling toward a gravitating object, were physically equivalent to inertial reference frames. This is why, for example, astronauts experience weightlessness when in free-fall orbit around the Earth, and why Newton's Laws of Motion are more easily discernible in such environments. If an astronaut places an object with mass in mid-air next to himself, it will remain stationary with respect to the astronaut due to its inertia. This is the same thing that would occur if the astronaut and the object were in intergalactic space with no net force of gravity acting on their shared reference frame. This principle of equivalence was one of the foundational underpinnings for the development of the general theory of relativity.<ref>{{#invoke:citation/CS1|citation |CitationClass=web }}</ref> 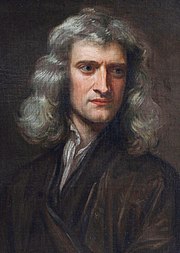 Though Sir Isaac Newton's most famous equation is
<math>\scriptstyle{\vec{F}=m\vec{a}}</math>, he actually wrote down a different form for his second law of motion that did not use differential calculus.

{{#invoke:main|main}} A modern statement of Newton's Second Law is a vector equation:<ref group=Note>Newton's Principia Mathematica actually used a finite difference version of this equation based upon impulse. See Impulse.</ref>

where <math>\scriptstyle \vec{p}</math> is the momentum of the system, and <math>\scriptstyle \vec{F}</math> is the net (vector sum) force. In equilibrium, there is zero net force by definition, but (balanced) forces may be present nevertheless. In contrast, the second law states an unbalanced force acting on an object will result in the object's momentum changing over time.<ref name="Principia"/>

By the definition of momentum,

Newton's second law applies only to a system of constant mass,<ref name=Halliday group=Note>"It is important to note that we cannot derive a general expression for Newton's second law for variable mass systems by treating the mass in F = dP/dt = d(Mv) as a variable. [...] We can use F = dP/dt to analyze variable mass systems only if we apply it to an entire system of constant mass having parts among which there is an interchange of mass." [Emphasis as in the original] </ref> and hence m may be moved outside the derivative operator. The equation then becomes

By substituting the definition of acceleration, the algebraic version of Newton's Second Law is derived:

Newton's Second Law asserts the direct proportionality of acceleration to force and the inverse proportionality of acceleration to mass. Accelerations can be defined through kinematic measurements. However, while kinematics are well-described through reference frame analysis in advanced physics, there are still deep questions that remain as to what is the proper definition of mass. General relativity offers an equivalence between space-time and mass, but lacking a coherent theory of quantum gravity, it is unclear as to how or whether this connection is relevant on microscales. With some justification, Newton's second law can be taken as a quantitative definition of mass by writing the law as an equality; the relative units of force and mass then are fixed.

The use of Newton's Second Law as a definition of force has been disparaged in some of the more rigorous textbooks,<ref name=FeynmanVol1 />:12-1<ref name=Kleppner />:59<ref>One exception to this rule is: {{#invoke:citation/CS1|citation |CitationClass=book }} Translated by: J. B. Sykes, A. D. Petford, and C. L. Petford. Library of Congress Catalog Number 67-30260. In section 7, pages 12–14, this book defines force as dp/dt.</ref> because it is essentially a mathematical truism. Notable physicists, philosophers and mathematicians who have sought a more explicit definition of the concept of force include Ernst Mach, Clifford Truesdell{{ safesubst:#invoke:Unsubst||date=__DATE__ |$B= {{#invoke:Category handler|main}}{{#invoke:Category handler|main}}[citation needed] }} and Walter Noll.<ref>{{#invoke:citation/CS1|citation |CitationClass=book }}</ref><ref>{{#invoke:citation/CS1|citation |CitationClass=web }}</ref>

Newton's Second Law can be used to measure the strength of forces. For instance, knowledge of the masses of planets along with the accelerations of their orbits allows scientists to calculate the gravitational forces on planets.

{{#invoke:main|main}} Newton's Third Law is a result of applying symmetry to situations where forces can be attributed to the presence of different objects. The third law means that all forces are interactions between different bodies,<ref>{{#invoke:Citation/CS1|citation |CitationClass=journal }}</ref><ref group=Note>"Any single force is only one aspect of a mutual interaction between two bodies." </ref> and thus that there is no such thing as a unidirectional force or a force that acts on only one body. Whenever a first body exerts a force F on a second body, the second body exerts a force −F on the first body. F and −F are equal in magnitude and opposite in direction. This law is sometimes referred to as the action-reaction law, with F called the "action" and −F the "reaction". The action and the reaction are simultaneous:

If object 1 and object 2 are considered to be in the same system, then the net force on the system due to the interactions between objects 1 and 2 is zero since

This means that in a closed system of particles, there are no internal forces that are unbalanced. That is, the action-reaction force shared between any two objects in a closed system will not cause the center of mass of the system to accelerate. The constituent objects only accelerate with respect to each other, the system itself remains unaccelerated. Alternatively, if an external force acts on the system, then the center of mass will experience an acceleration proportional to the magnitude of the external force divided by the mass of the system.<ref name=FeynmanVol1 />:19-1<ref name=Kleppner />

Combining Newton's Second and Third Laws, it is possible to show that the linear momentum of a system is conserved. Using

and integrating with respect to time, the equation:

is obtained. For a system that includes objects 1 and 2,

which is the conservation of linear momentum.<ref>{{#invoke:citation/CS1|citation |CitationClass=web }}</ref> Using the similar arguments, it is possible to generalize this to a system of an arbitrary number of particles. This shows that exchanging momentum between constituent objects will not affect the net momentum of a system. In general, as long as all forces are due to the interaction of objects with mass, it is possible to define a system such that net momentum is never lost nor gained.<ref name=FeynmanVol1 /><ref name=Kleppner />