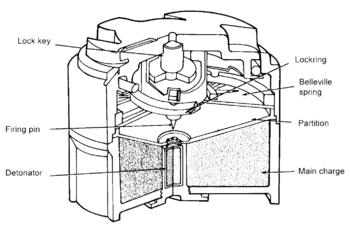 A firing pin or striker is part of the firing mechanism used in a firearm or explosive device e.g. an M14 landmine or bomb fuze. Firing pins may take many forms, though the types used in fuzes for single-use devices (such as landmines, artillery shells, cluster munitions and grenades etc.) generally have a sharpened point. In contrast, firing pins used in firearms usually have a small, rounded portion designed to strike the primer of a cartridge, detonating the priming compound, which then ignites the propellant (inside) or fires the detonator and booster.<ref name=xd>{{#invoke:citation/CS1|citation |CitationClass=web }}</ref><ref name=saamiF>{{#invoke:citation/CS1|citation |CitationClass=web }}</ref><ref name=saamiS>{{#invoke:citation/CS1|citation |CitationClass=web }}</ref>

A firing pin is a lightweight part, which serves to transfer energy from a spring-loaded hammer to the primer, while a striker is usually heavier, and is directly connected to the spring providing the energy to impact the primer. Striker mechanisms are generally simpler, since they combine the functions of hammer and firing pin in one.<ref name=xd />

The firing pin or striker is generally located in the bolt of a repeating firearm. Firearms that do not have bolts, such as revolvers and many types of single-shot actions, generally have a very short firing pin in the frame, or else attached to the hammer itself. These types of firearms are almost never striker fired, as there is insufficient space to house a striker mechanism. Strikers are most commonly found in semi-automatic pistols and bolt-action firearms.<ref name=xd />