::Evacuations of civilians in Britain during World War II 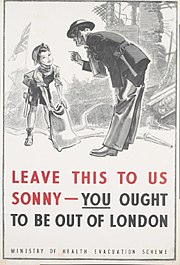 The UK Ministry of Health advertised the evacuation programme through posters, among other means. The poster depicted here was used in the London Underground.

<title>The evacuation of civilians in Britain during the Second World War was designed to save civilians in Britain, particularly children, from the risks associated with aerial bombing of cities by moving them to areas thought to be less at risk. Operation Pied Piper, which began on 1 September 1939, officially relocated more than 3.5 million people. Further waves of official evacuation and re-evacuation occurred on the south and east coasts in June 1940, when a seaborne invasion was expected, and from affected cities after the Blitz began in September 1940. There were also official evacuations from the UK to other parts of the British Empire, and many non-official evacuations within and from the UK. Other mass movements of civilians included British citizens arriving from the Channel Islands, and displaced people arriving from continental Europe.

Child evacuees from Bristol arriving at Brent in Devon in 1940

The Government Evacuation Scheme was developed during summer 1938 by the Anderson Committee and implemented by the Ministry of Health. The country was divided into zones, classified as either "evacuation", "neutral", or "reception", with priority evacuees being moved from the major urban centres and billeted on the available private housing in more rural areas. Each area covered roughly a third of the population, although several urban areas later bombed were not classified for evacuation. In early 1939, the reception areas compiled lists of available housing. Space for a couple of thousand people was found, and the government also constructed camps which provided a few thousand additional spaces.