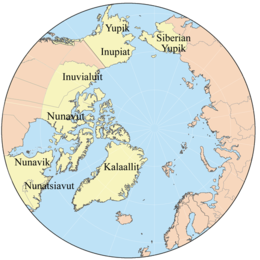 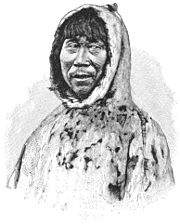 The two main peoples known as "Eskimo" are: the Inuit of Canada, Northern Alaska (sub-group "Inupiat"), and Greenland, and the Yupik of eastern Siberia and Alaska. The Yupik comprise speakers of four distinct Yupik languages: one used in the Russian Far East and the others among people of Western Alaska, Southcentral Alaska and along the Gulf of Alaska coast. A third northern group, the Aleut, is closely related to the Eskimo. They share a relatively recent, common ("Paleo-Eskimo") ancestor, and a language group (Eskimo-Aleut).

While since the late 20th century, numerous indigenous people rejected the use of the term "Eskimo" as offensive, because it was used by people who discriminated against them,<ref>"Inupiatun, Northwest Alaska." Ethnologue. Retrieved 8 Dec 2013.</ref><ref name=n580>Nuttall 580</ref> in its linguistic origins<ref name="anlc" /> the word did not have an offensive meaning.<ref>{{#invoke:citation/CS1|citation |CitationClass=web }}</ref> Alternative terms, such as Inuit-Yupik, have been proposed,<ref>Holton, Gary. "Place-naming strategies in Inuit-Yupik and Dene languages in Alaska.", Academia.edu, Retrieved 27 Jan 2014.</ref> but none has gained widespread acceptance.

In Canada and Greenland, the term "Eskimo" has fallen out of favor as pejorative and has been widely replaced by the term "Inuit", "Alaska Natives", or terms specific to a particular tribe. Under U.S. and Alaskan law, however, as well as the linguistic and cultural traditions of Alaska, "Alaska Natives" refers to all indigenous peoples of Alaska. The term is applied to not only such groups as the Aleut, who share a recent ancestor with the Inuit and Yupik groups, but also to the largely unrelated<ref>http://www.ucl.ac.uk/news/news-articles/1207/12072012-native-american-migration</ref> indigenous peoples of the Pacific Northwest Coast and the Dene, who descend from other, unrelated major language and ethnic groups.