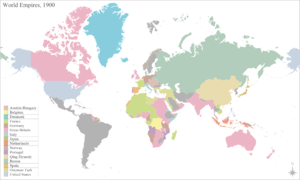 Imperialism and colonization in 1900

{{#invoke:Sidebar|sidebar}} An empire is defined as "an aggregate of nations or people ruled over by an emperor or other powerful sovereign or government, usually a territory of greater extent than a kingdom, as the former British Empire, French Empire, Russian Empire, Byzantine Empire or Roman Empire."<ref>Webster's Encyclopedic Unabridged Dictionary of the English Language, Portland House, New York, 1989, p. 468.</ref> An empire can be made solely of contiguous territories such as the Austro-Hungarian Empire, or of territories far remote from the homeland, such as a colonial empire.

Aside from the more formal usage, the term "empire" can also be used to refer to a large-scale business enterprise (e.g. a transnational corporation), a political organisation controlled by a single individual (a political boss) or a group (political bosses).<ref>{{#invoke:citation/CS1|citation |CitationClass=web }}</ref> The term "empire" is associated with other words such as imperialism, colonialism, and globalization. Empire is often used to describe a displeasure to overpowering situations.<ref name="Empire: A Very Short Introduction">{{#invoke:citation/CS1|citation |CitationClass=book }}</ref> The effects of imperialism exist throughout the world today.

An imperial political structure can be established and maintained in two ways: (i) as a territorial empire of direct conquest and control with force or (ii) as a coercive, hegemonic empire of indirect conquest and control with power. The former method provides greater tribute and direct political control, yet limits further expansion because it absorbs military forces to fixed garrisons. The latter method provides less tribute and indirect control, but avails military forces for further expansion.<ref>Ross Hassig, Mexico and the Spanish Conquest (1994), pp. 23–24, ISBN 0-582-06829-0 (pbk)</ref> Territorial empires (e.g., the Mongol Empire and Median Empire) tend to be contiguous areas. The term, on occasion, has been applied to maritime empires or thalassocracies, (e.g., the Athenian and British empires) with looser structures and more scattered territories. Empires are usually larger than kingdoms.

This aspiration to universality resulted in conquest by converting ‘outsiders’ or ‘inferiors’ into the colonialized religion. This association of nationality and race became complex and has had a more intense drive for expansion.<ref>{{#invoke:citation/CS1|citation |CitationClass=book }}</ref>