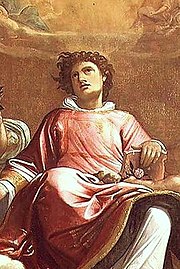 Saint Stephen, one of the first seven deacons in the Christian Church, holding a Gospel Book. Painting by Giacomo Cavedone in 1601.

Deacon is a ministry in the Christian Church that is generally associated with service of some kind, but which varies among theological and denominational traditions. In many traditions the "diaconate" (or deaconate), the term for a deacon's office, is a clerical office; in others it is for laity.

The title "deaconess" (διακόνισσα) is not found in the Bible. However, a woman, Phoebe, is mentioned at Romans 16:1–2 as a deacon (diakonos) of the church in Cenchreae. Nothing more specific is said about her duties or authority. It is generally believed that the office of deacon originated in the selection of seven men by the apostles, among them Stephen, to assist with the charitable work of the early church as recorded in .<ref></ref><ref>{{#invoke:citation/CS1|citation |CitationClass=web }}</ref> Female deacons are mentioned by Pliny the Younger in a letter to Trajan dated c. 112. The exact relationship between male and female deacons varies. In some traditions a female deacon is simply a member of the order of deacons; in others, deaconesses constitute a separate order; in others, the title "deaconess" was also given to the wife of a deacon.

A biblical description of the qualities required of a deacon, and of his household, can be found in .

Among the more prominent deacons in history are Stephen, the first Christian martyr (the "protomartyr"); Philip, whose baptism of the Ethiopian eunuch is recounted in ; Saint Lawrence, an early Roman martyr; Saint Vincent of Saragossa, protomartyr of Spain; Saint Francis of Assisi, founder of the mendicant Franciscans; Saint Ephrem the Syrian and Saint Romanos the Melodist, a prominent early hymnographer. Prominent historical figures who played major roles as deacons and went on to higher office include Saint Athanasius of Alexandria, Thomas Becket and Reginald Pole. On June 8, 536 a serving Roman deacon was raised to Pope, Silverius. His father, Pope Agapetus, had died and the office had been vacant for over a month.<ref>{{#invoke:citation/CS1|citation |CitationClass=citation }}.</ref>

The title is also used for the president, chairperson, or head of a trades guild in Scotland; and likewise to two officers of a Masonic Lodge.