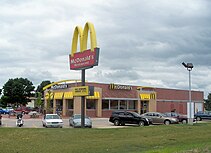 McDonald's Corporation is one of the most recognizable corporations in the world.

A corporation is a company or group of people authorized to act as a single entity (legally a person) and recognized as such in law. Early incorporated entities were established by charter (i.e. by an ad hoc act granted by a monarch or passed by a parliament or legislature). Most jurisdictions now allow the creation of new corporations through registration.

Corporations chartered in regions where they are distinguished by whether they are allowed to be for profit or not are referred to as "for profit" and "not-for-profit" corporations, respectively.

Registered corporations have legal personality and are owned by shareholders<ref>{{#invoke:citation/CS1|citation |CitationClass=book }}</ref><ref>{{#invoke:citation/CS1|citation |CitationClass=book }}</ref> whose liability is limited to their investment. Shareholders do not typically actively manage a corporation; shareholders instead elect or appoint a board of directors to control the corporation in a fiduciary capacity.

In American English the word corporation is most often used to describe large business corporations.<ref>corporation. CollinsDictionary.com. Collins English Dictionary – Complete & Unabridged 11th Edition. Retrieved December 07, 2012.</ref> In British English and in the Commonwealth countries, the term company is more widely used to describe the same sort of entity while the word corporation encompasses all incorporated entities. In American English, the word company can include entities such as partnerships that would not be referred to as companies in British English as they are not a separate legal entity.

Despite not being human beings, corporations, as far as the law is concerned, are legal persons, and have many of the same rights and responsibilities as natural persons do. Corporations can exercise human rights against real individuals and the state,<ref>{{#invoke:citation/CS1|citation |CitationClass=book }}</ref><ref>e.g. South African Constitution Sect.8, especially Art.(4)</ref> and they can themselves be responsible for human rights violations.<ref>Phillip I. Blumberg, The Multinational Challenge to Corporation Law: The Search for a New Corporate Personality, (1993) discusses the controversial nature of additional rights being granted to corporations.</ref> Corporations can be "dissolved" either by statutory operation, order of court, or voluntary action on the part of shareholders. Insolvency may result in a form of corporate failure, when creditors force the liquidation and dissolution of the corporation under court order,<ref>See, for example, the Business Corporations Act (B.C.) [SBC 2002] CHAPTER 57, Part 10</ref> but it most often results in a restructuring of corporate holdings. Corporations can even be convicted of criminal offenses, such as fraud and manslaughter. However corporations are not considered living entities in the way that humans are.<ref>e.g. Corporate Manslaughter and Corporate Homicide Act 2007</ref>