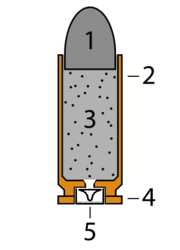 A modern cartridge consists of the following:
1. the bullet, as the projectile;
2. the case, which holds all parts together;
3. the propellant, for example gunpowder or cordite;
4. the rim, which provides the extractor on the firearm a place to grip the casing to remove it from the chamber once fired;
5. the primer, which ignites the propellant.

A bullet is a projectile propelled by a firearm, sling, slingshot, or air gun. Bullets do not normally contain explosives,<ref>The Exploding Bullet Journal of Clinical Pathology</ref> but damage the intended target by impact and penetration. The word "bullet" is sometimes colloquially used to refer to ammunition in general, or to a cartridge, which is a combination of the bullet, case/shell, powder, and primer. This use of 'bullet', when 'cartridge' is intended, leads to confusion when the components of a cartridge are discussed or intended.

Bullets fired from slings, slingshots, and many airguns (including BB guns) travel well below the speed of sound (about 343 m/s or 1126 ft/s in dry air at 20 °C or 68 °F). Low-power handguns have muzzle velocities generally less than the speed of sound (subsonic), while bullets fired from high-power handguns (such as a .44 Magnum) and from rifles have an initial speed faster than the speed of sound, meaning they are supersonic and thus can travel a substantial distance and even hit a target before a nearby observer hears the "bang" of the shot. Bullet speed through air depends on a number of factors such as barometric pressure, humidity, air temperature, and wind speed.