A star-forming region in the Large Magellanic Cloud, an irregular galaxy. 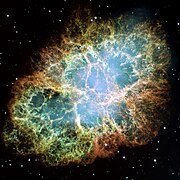 A giant Hubble mosaic of the Crab Nebula, a supernova remnant

Astronomy is a natural science which is the study of celestial objects (such as stars, galaxies, planets, moons, asteroids, comets and nebulae), the physics, chemistry, and evolution of such objects, and phenomena that originate outside the atmosphere of Earth, including supernovae explosions, gamma ray bursts, and cosmic microwave background radiation. A related but distinct subject, physical cosmology, is concerned with studying the universe as a whole.<ref>{{#invoke:citation/CS1|citation |CitationClass=book }}</ref>

Astronomy is one of the oldest sciences. The early civilizations in recorded history, such as the Babylonians, Greeks, Indians, Egyptians, Nubians, Iranians, Chinese, and Maya performed methodical observations of the night sky. However, the invention of the telescope was required before astronomy was able to develop into a modern science. Historically, astronomy has included disciplines as diverse as astrometry, celestial navigation, observational astronomy and the making of calendars, but professional astronomy is nowadays often considered to be synonymous with astrophysics.<ref>{{#invoke:citation/CS1|citation |CitationClass=book }}</ref>

Astronomy is one of the few sciences where amateurs can still play an active role, especially in the discovery and observation of transient phenomena. Amateur astronomers have made and contributed to many important astronomical discoveries.