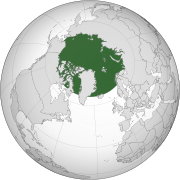 Location of the Arctic

MODIS image of the Arctic

The Arctic ({{#invoke:IPAc-en|main}}f) is a polar region located at the northernmost part of the Earth. The Arctic consists of the Arctic Ocean and parts of Alaska (United States), Canada, Finland, Greenland (Denmark), Iceland, Norway, Russia, and Sweden. The Arctic region consists of a vast ocean with a seasonally varying ice cover, surrounded by treeless permafrost. The area can be defined as north of the Arctic Circle (66° 33'N), the approximate limit of the midnight sun and the polar night. Alternatively, it can be defined as the region where the average temperature for the warmest month (July) is below {{safesubst:#invoke:convert|convert}}; the northernmost tree line roughly follows the isotherm at the boundary of this region.<ref>"arctic." Dictionary.com Unabridged (v 1.1). Random House, Inc. Retrieved 2 May 2009.</ref><ref>{{#invoke:citation/CS1|citation |CitationClass=book }}</ref>

Socially and politically, the Arctic region includes the northern territories of the eight Arctic states, although by natural science definitions, much of this territory is considered subarctic. The Arctic region is a unique area among Earth's ecosystems. For example, the cultures in the region and the Arctic indigenous peoples have adapted to its cold and extreme conditions. In recent years, the extent of the sea ice has declined.<ref name="Serreze, Mc; Holland, Mm; Stroeve, J 2007 1533–6"/><ref name="link5">"Global Sea Ice Extent and Concentration: What sensors on satellites are telling us about sea ice." National Snow and Ice Data Center. Retrieved 1 May 2009.</ref> Life in the Arctic includes organisms living in the ice, zooplankton and phytoplankton, fish and marine mammals, birds, land animals, plants and human societies.<ref>Christopher Krembs and Jody Deming. "Organisms that thrive in Arctic sea ice." National Oceanic and Atmospheric Administration. 18 November 2006.</ref>