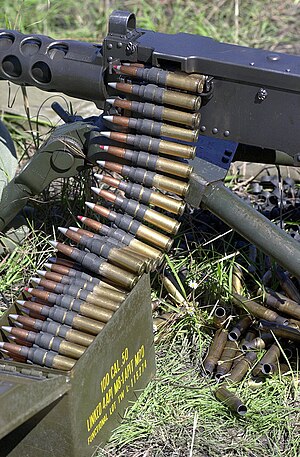 A belt of 0.50 caliber ammunition loaded to an M2 Browning. Every fifth round with a red tip is an M20 (armour piercing incendiary tracer).

Ammunition (commonly shortened to ammo) is propellant and projectile, or broadly anything that can be used in combat including bombs, missiles, warheads, landmines, naval mines, and anti-personnel mines. The word comes from the French la munition which is all material used for war. The collective term for all types of ammunition is munitions.

The purpose of ammunition is to project force against a selected target. However, the nature of ammunition use also includes delivery or combat supporting munitions such as pyrotechnic or incendiary compounds. Since the design of the cartridge, the meaning has been transferred to the assembly of a projectile and its propellant in a single package.