Means for recording information H.G. Wells argued that writing has the ability to "put agreements, laws, commandments on record. It made the growth of states larger than the old city states possible. It made a continuous historical consciousness possible. The command of the priest or king and his seal could go far beyond his sight and voice and could survive his death".<ref>{{#invoke:citation/CS1|citation |CitationClass=book }}</ref>

A logogram is a written character which represents a word or morpheme. A vast number of logograms are needed to write Chinese characters, cuneiform, and Mayan, where a glyph may stand for a morpheme, a syllable, or both - ("logoconsonantal" in the case of hieroglyphs). Many logograms have an ideographic component (Chinese "radicals", hieroglyphic "determiners"). For example, in Mayan, the glyph for "fin", pronounced "ka'", was also used to represent the syllable "ka" whenever the pronunciation of a logogram needed to be indicated, or when there was no logogram. In Chinese, about 90% of characters are compounds of a semantic (meaning) element called a radical with an existing character to indicate the pronunciation, called a phonetic. However, such phonetic elements complement the logographic elements, rather than vice versa.

The main logographic system in use today is Chinese characters, used with some modification for the various languages of China, and for Japanese. Korean, even in South Korea, today uses mainly the phonetic Hangul system.

A syllabary is a set of written symbols that represent (or approximate) syllables. A glyph in a syllabary typically represents a consonant followed by a vowel, or just a vowel alone, though in some scripts more complex syllables (such as consonant-vowel-consonant, or consonant-consonant-vowel) may have dedicated glyphs. Phonetically related syllables are not so indicated in the script. For instance, the syllable "ka" may look nothing like the syllable "ki", nor will syllables with the same vowels be similar.

Syllabaries are best suited to languages with a relatively simple syllable structure, such as Japanese. Other languages that use syllabic writing include the Linear B script for Mycenaean Greek; Cherokee; Ndjuka, an English-based creole language of Surinam; and the Vai script of Liberia. Most logographic systems have a strong syllabic component. Ethiopic, though technically an abugida, has fused consonants and vowels together to the point where it is learned as if it were a syllabary.

As languages often evolve independently of their writing systems, and writing systems have been borrowed for languages they were not designed for, the degree to which letters of an alphabet correspond to phonemes of a language varies greatly from one language to another and even within a single language.

In most of the writing systems of the Middle East, it is usually only the consonants of a word that are written, although vowels may be indicated by the addition of various diacritical marks. Writing systems based primarily on marking the consonant phonemes alone date back to the hieroglyphics of ancient Egypt. Such systems are called abjads, derived from the Arabic word for "alphabet".

In most of the alphabets of India and Southeast Asia, vowels are indicated through diacritics or modification of the shape of the consonant. These are called abugidas. Some abugidas, such as Ethiopic and Cree, are learned by children as syllabaries, and so are often called "syllabics". However, unlike true syllabaries, there is not an independent glyph for each syllable.

Sometimes the term "alphabet" is restricted to systems with separate letters for consonants and vowels, such as the Latin alphabet, although abugidas and abjads may also be accepted as alphabets. Because of this use, Greek is often considered to be the first alphabet.

A featural script notates the building blocks of the phonemes that make up a language. For instance, all sounds pronounced with the lips ("labial" sounds) may have some element in common. In the Latin alphabet, this is accidentally the case with the letters "b" and "p"; however, labial "m" is completely dissimilar, and the similar-looking "q" and "d" are not labial. In Korean hangul, however, all four labial consonants are based on the same basic element, but in practice, Korean is learned by children as an ordinary alphabet, and the featural elements tend to pass unnoticed.

Another featural script is SignWriting, the most popular writing system for many sign languages, where the shapes and movements of the hands and face are represented iconically. Featural scripts are also common in fictional or invented systems, such as J.R.R. Tolkien's Tengwar. 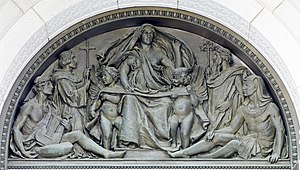 Historians draw a sharp distinction between prehistory and history, with history defined by the advent of writing. The cave paintings and petroglyphs of prehistoric peoples can be considered precursors of writing, but they are not considered true writing because they did not represent language directly.

The many tools and writing materials used throughout history include stone tablets, clay tablets, bamboo slats, wax tablets, vellum, parchment, paper, copperplate, styluses, quills, ink brushes, pencils, pens, and many styles of lithography. It is speculated that the Incas might have employed knotted cords known as quipu (or khipu) as a writing system.<ref>{{#invoke:citation/CS1|citation |CitationClass=web }}</ref>