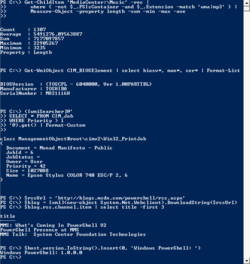 Win32 console is a text user interface implementation within the system of Windows API, which runs console applications. A Win32 console has a screen buffer and an input buffer, and is available both as a window or in text mode screen, with switching back and forth available via Alt-Enter keys.

Win32 consoles are typically used for applications that do not need to display images but which might use color. Examples include command line interface tools; command line interpreters such as Windows Command Prompt, Windows PowerShell; file managers such as Far Manager and Midnight Commander; and editors such as the MS-DOS Editor.