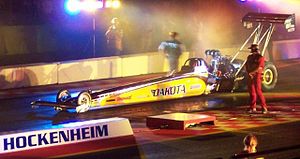 convert}} in 0.86 seconds. This is a horizontal acceleration of 5.3 g. Combined with the vertical g-force in the stationary case the Pythagorean theorem yields a g-force of 5.4 g. It is this g-force that causes the driver's weight if one uses the operational definition. If one uses the gravitational definition, the driver's weight is unchanged by the motion of the car.

The most common definition of weight found in introductory physics textbooks defines weight as the force exerted on a body by gravity.<ref name="Morrison"/><ref name="Galili-Lehavi"/> This is often expressed in the formula W = mg, where W is the weight, m the mass of the object, and g gravitational acceleration.

In 1901, the 3rd General Conference on Weights and Measures (CGPM) established this as their official definition of weight:

"The word weight denotes a quantity of the same natureUnknown extension tag "ref" as a force: the weight of a body is the product of its mass and the acceleration due to gravity."

This resolution defines weight as a vector, since force is a vector quantity. However, some textbooks also take weight to be a scalar by defining:

The gravitational acceleration varies from place to place. Sometimes, it is simply taken to have a standard value of 9.80665 m/s2, which gives the standard weight.<ref name="3rdCGPM">{{#invoke:citation/CS1|citation |CitationClass=web }}</ref>

The operational definition, as usually given, does not explicitly exclude the effects of buoyancy, which reduces the measured weight of an object when it is immersed in a fluid such as air or water. As a result, a floating balloon or an object floating in water might be said to have zero weight.

{{#invoke:main|main}} In many real world situations the act of weighing may produce a result that differs from the ideal value provided by the definition used. This is usually referred to as the apparent weight of the object. A common example of this is the effect of buoyancy, when an object is immersed in a fluid the displacement of the fluid will cause an upward force on the object, making it appear lighter when weighed on a scale.<ref>{{#invoke:citation/CS1|citation |CitationClass=book }}</ref> The apparent weight may be similarly affected by levitation and mechanical suspension. When the gravitational definition of weight is used, the operational weight measured by an accelerating scale is often also referred to as the apparent weight.<ref>{{#invoke:Citation/CS1|citation |CitationClass=journal }}</ref>