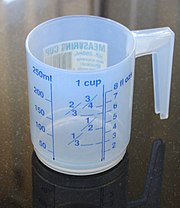 A measuring cup can be used to measure volumes of liquids. This cup measures volume in units of cups, fluid ounces, and millilitres.

Volume is the quantity of three-dimensional space enclosed by some closed boundary, for example, the space that a substance (solid, liquid, gas, or plasma) or shape occupies or contains.<ref> {{#invoke:citation/CS1|citation |CitationClass=web }} </ref> Volume is often quantified numerically using the SI derived unit, the cubic metre. The volume of a container is generally understood to be the capacity of the container, i. e. the amount of fluid (gas or liquid) that the container could hold, rather than the amount of space the container itself displaces.

Three dimensional mathematical shapes are also assigned volumes. Volumes of some simple shapes, such as regular, straight-edged, and circular shapes can be easily calculated using arithmetic formulas. Volumes of a complicated shape can be calculated by integral calculus if a formula exists for the shape's boundary. Where a variance in shape and volume occurs, such as those that exist between different human beings, these can be calculated using three-dimensional techniques such as the Body Volume Index. One-dimensional figures (such as lines) and two-dimensional shapes (such as squares) are assigned zero volume in the three-dimensional space.

The volume of a solid (whether regularly or irregularly shaped) can be determined by fluid displacement. Displacement of liquid can also be used to determine the volume of a gas. The combined volume of two substances is usually greater than the volume of one of the substances. However, sometimes one substance dissolves in the other and the combined volume is not additive.<ref>One litre of sugar (about 970 grams) can dissolve in 0.6 litres of hot water, producing a total volume of less than one litre. {{#invoke:citation/CS1|citation |CitationClass=web }}</ref>

In differential geometry, volume is expressed by means of the volume form, and is an important global Riemannian invariant. In thermodynamics, volume is a fundamental parameter, and is a conjugate variable to pressure.