In 1999, Offer directed and appeared in The Underground Comedy Movie, which was met with extremely negative reviews. DVDs of the film were marketed via television infomercial. The film also led to several lawsuits. Although the film was released and screened in 1999, Offer was bankrupt by 2002 and home video distribution plans were shelved. Offer, who had previously been a successful vegetable chopper salesman and businessman, resumed selling vegetable choppers at swap meets to support himself and raise money to complete his film project. Within a few months, he had earned enough to resume production, and the movie was finally completed, released, and marketed entirely on late-night infomercials that Offer paid for with his earnings from the swap meet vegetable chopper sales. The film has sold in excess of 100,000 copies and Offer has used the proceeds from sales to file a lawsuit against the Church of Scientology.<ref name="rovell">{{#invoke:citation/CS1|citation |CitationClass=web }}</ref> He is an ex-Scientologist.<ref name=ew.com>{{#invoke:citation/CS1|citation |CitationClass=news }}</ref><ref name=prnews>"Filmmaker Sues Church of Scientology"</ref>

In 2011, he appeared as himself in the Adam Sandler film Jack and Jill. Title character Jill, played by Sandler, referred to him as "the ShamWow guy".

In 2013, Offer released the universally panned InAPPropriate Comedy, which he directed, wrote and appears in as a character called 'Peeping Tom'.<ref>{{#invoke:citation/CS1|citation |CitationClass=news }}</ref> The film was originally envisioned as a sequel to his previous anthology, called Underground Comedy 2010. The film features stars Rob Schneider, Michelle Rodriguez, Adrien Brody, and Lindsay Lohan. Examples of film sketches include comedian Ari Shaffir as 'The Amazing Racist', with deliberately offensive hidden-camera encounters with members of different minority groups, and Brody as 'Flirty Harry', a Dirty Harry spoof.<ref>Someone Thought It Was a Good Idea to Spend Money On This, Rope of Silicon</ref>

Offer funded The Underground Comedy Movie with his own money, but had difficulty selling it. Inspired by the success of Girls Gone Wild marketing, he decided to put the trailer in an infomercial, and he reportedly sold 50,000 copies via direct order and 50,000 more in stores.<ref name="rovell"/> Having since pitched for multiple products, he created a public image of himself as a compelling, fast-talking salesman.<ref name=yahoo/> In 2010, he advertised Eminem's Recovery album.<ref>{{#invoke:citation/CS1|citation |CitationClass=web }}</ref>

The success of The Underground Comedy Movie infomercial suggested to Offer that he should sell something more mainstream. Drawing upon his experience working in flea markets, he decided in 2006 to market a cleaning product that he saw there, an absorbent towel that he called the "ShamWow!".<ref name=rovell/><ref name="Stevenson">{{#invoke:Citation/CS1|citation |CitationClass=journal }}</ref> The title of the product derives from the French pronunciation of the chamois. Offer visited the factory in Germany where the product is made, and he decided to incorporate that fact into the TV pitch.<ref name=rovell/>

The advertisement, filmed in the summer of 2007 with a budget of $20,000, became a popular hit.<ref name=rovell/> Slate.com's Seth Stevenson praised Offer for his "impressive and subtle mastery of the pitchman's art" (with lines such as "you know the Germans always make good stuff"), and wondered if Offer's "abrasive manner might also mark a unique, new strategy in the annals of pitchdom." Stevenson compared Offer to earlier, "more upbeat" television pitchmen like Billy Mays and the Home Shopping Network hosts and concluded that Offer's "smooth-talking condescension" was more suited to the present "zeitgeist" than the "earnest fervor" of spokesmen like Mays and Ron Popeil.<ref name="Stevenson"/>

Offer says that he has sold millions of the towels. In contrast to claims that the absorbency of the towels are over-hyped, he responds that returns are low. Notwithstanding his infomercial success, Offer says that "this is not my career" and that he considers himself to be in the film business.<ref name=rovell/>

Pitchman Billy Mays had been promoting a similar product called Zorbeez two years prior to Offer's "ShamWow!" product. Mays noted that the "ShamWow!" commercials use many of the same product demonstrations as the earlier-produced Zorbeez commercial. In February 2009 while on the Adam Carolla radio show, Billy Mays publicly challenged Offer to a "pitch off" between their respective absorbent towel products.<ref name="corolla">The Daily Tube: Billy Mays 'ShamPows' ShamWow Guy{{ safesubst:#invoke:Unsubst||date=__DATE__ |$B= {{#invoke:Category handler|main}}{{#invoke:Category handler|main}}[dead link] }}</ref> Popular Mechanics tested the absorbency of the two towel products and declared "ShamWow!" was the more effective of the two, but noted "If you have reusable cloth rags (and a roll of paper towels for backup), then neither product is necessary."<ref>{{#invoke:citation/CS1|citation |CitationClass=web }}</ref>

During the episode, it was suggested that the Popular Mechanics tester did not use the Zorbeez correctly.<ref>Pitchmen, episode: "Revenge of the Pitchmen" (2009-07-01).</ref>

Following the popularity of the commercial, TMZ in 2009 posted a remix of the commercial on their site.<ref>{{#invoke:citation/CS1|citation |CitationClass=web }}</ref> The remix was originally created by DJ Steve Porter and uploaded on YouTube.<ref>http://www.youtube.com/watch?v=LV6puTS14Ho</ref> 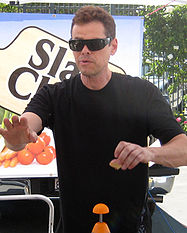 In December 2008, Offer, who had previously sold kitchen utensils at swap meets,<ref name="Stevenson"/> appeared in another kitchen-gadget infomercial, advertising the Slap Chop and the Graty. The Slap Chop is a hand-held chopping device with internal blades; to operate it, the user places it over a food item and slaps down the button on the top. The Graty is a cheese grater operated by placing the cheese inside and then turning the outside housing of the utensil which causes the cheese to be grated.<ref>{{#invoke:citation/CS1|citation |CitationClass=news }}</ref> Both of these devices are offered in several colors. Offer's aggressiveness and use of double entendres like "you're gonna love my nuts" in the English version and "mira mi huevo" and "excitante" in a version he made for Spanish speaking audiences have earned him notoriety,<ref name="Griner">{{#invoke:citation/CS1|citation |CitationClass=news }}</ref> and, according to an Adweek blog, helped make Offer "the man who could beat Billy Mays at his own game."

Billy Mays had been promoting a similar product set which included the Quick Chop utensil and the Quick Grater utensil prior to Offer's Slap Chop/Graty product set. Mays again noted that the Slap Chop commercials use many of the same demos as the earlier-produced Quick Chop commercial. Mays said in the same Adam Carolla radio show interview in February 2009 that Offer stole not only the Zorbeez product idea, but also the Quick Chop idea.<ref name="corolla"/>

The Slap-Chop was featured for a split-second before the Mandarin's broadcast in Iron Man 3.<ref>{{#invoke:citation/CS1|citation |CitationClass=web }}</ref>

In 2012 Offer returned to television selling the "Schticky", a reusable lint roller that comes in three sizes: little Schticky, Schticky, and big Schticky.

The commercial makes many references to his other two commercials for the ShamWow and the Slap Chop, with Offer saying many of his catchphrases. He also pokes fun at his 2009 arrest by posing for a fake mugshot.<ref>Official Schticky website</ref><ref>{{#invoke:citation/CS1|citation |CitationClass=web }}</ref><ref>{{#invoke:citation/CS1|citation |CitationClass=web }}</ref>

The Schticky commercial was co-written by the comedian Dante.

In 2013, Offer began a series of advertisements pitching a kitchen cleaner called "InVINCEable". He hoped that this product, the first one he developed himself, would be the start of a comeback. He also expressed interest in working as a TV producer for other salespeople.<ref name=cleans>{{#invoke:citation/CS1|citation |CitationClass=news }}</ref>

Offer returned later in 2014 with a combination vegetable peeler and cutting knife called the "DaVinci Pro", where he once again claimed that the item was easier to use than a more expensive, larger item (in this case a food processor which he tossed through a window in a nod to the Slap Chop commercial). As has been the case in the past, Offer freely uses double entendres in the advertisement such as references to "cutting the cheese", "taking out your wiener", and "your wife's melons".