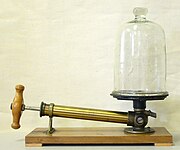 Vacuum is space void of matter. The word stems from the Latin adjective vacuus for "vacant" or "void". An approximation to such vacuum is a region with a gaseous pressure much less than atmospheric pressure.<ref name="chambers">{{#invoke:citation/CS1|citation |CitationClass=book }}{{ safesubst:#invoke:Unsubst||$N=Page needed |date=__DATE__ |$B= {{#invoke:Category handler|main}}{{#invoke:Category handler|main}}[page needed] }}</ref> Physicists often discuss ideal test results that would occur in a perfect vacuum, which they sometimes simply call "vacuum" or free space, and use the term partial vacuum to refer to an actual imperfect vacuum as one might have in a laboratory or in space. In engineering and applied physics on the other hand, vacuum refers to any space in which the pressure is lower than atmospheric pressure.<ref>{{#invoke:citation/CS1|citation |CitationClass=book }}</ref> The Latin term in vacuo is used to describe an object as being in what would otherwise be a vacuum.

The quality of a partial vacuum refers to how closely it approaches a perfect vacuum. Other things equal, lower gas pressure means higher-quality vacuum. For example, a typical vacuum cleaner produces enough suction to reduce air pressure by around 20%.<ref>{{#invoke:citation/CS1|citation |CitationClass=book }} Note that 1 inch of water is ≈0.0025 atm.</ref> Much higher-quality vacuums are possible. Ultra-high vacuum chambers, common in chemistry, physics, and engineering, operate below one trillionth (10−12) of atmospheric pressure (100 nPa), and can reach around 100 particles/cm3.<ref name=Gabrielse/> Outer space is an even higher-quality vacuum, with the equivalent of just a few hydrogen atoms per cubic meter on average.<ref name=tadokoro>{{#invoke:Citation/CS1|citation |CitationClass=journal }} This source estimates a density of {{safesubst:#invoke:val|main}} for the Local Group. An atomic mass unit is {{safesubst:#invoke:val|main}}, for roughly 40 atoms per cubic meter.</ref> According to modern understanding, even if all matter could be removed from a volume, it would still not be "empty" due to vacuum fluctuations, dark energy, transiting gamma- and cosmic rays, neutrinos, along with other phenomena in quantum physics. In the electromagnetism in the 19th century, vacuum was thought to be filled with a medium called aether. In modern particle physics, the vacuum state is considered the ground state of matter.

Vacuum has been a frequent topic of philosophical debate since ancient Greek times, but was not studied empirically until the 17th century. Evangelista Torricelli produced the first laboratory vacuum in 1643, and other experimental techniques were developed as a result of his theories of atmospheric pressure. A torricellian vacuum is created by filling with mercury a tall glass container closed at one end and then inverting the container into a bowl to contain the mercury.<ref>How to Make an Experimental Geissler Tube, Popular Science monthly, February 1919, Unnumbered page. Bonnier Corporation</ref>

Vacuum became a valuable industrial tool in the 20th century with the introduction of incandescent light bulbs and vacuum tubes, and a wide array of vacuum technology has since become available. The recent development of human spaceflight has raised interest in the impact of vacuum on human health, and on life forms in general. 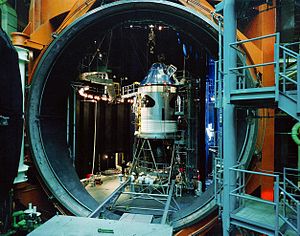