The flag of the United States of America from 1861 to 1863. The southern states were still represented in the number of stars in the flag, since the Confederacy's declaration of secession from the Union was still considered illegal by the United States. In 1863, a star was added to represent the new state of West Virginia. 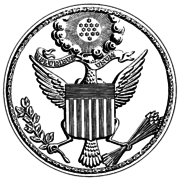 The Great Seal of the United States of America during the war.

All the Union states provided soldiers for the U.S. Army; the border areas also sent large numbers of soldiers to the Confederacy. The Border states played a major role as a supply base for the Union invasion of the Confederacy. The Northeast provided the industrial resources for a mechanized war producing large quantities of munitions and supplies, as well as financing for the war. The Midwest provided soldiers, food and horses, as well as financial support and training camps. Army hospitals were set up across the Union. Most states had Republican governors who energetically supported the war effort and suppressed anti-war subversion in 1863–64. The Democratic Party strongly supported the war in 1861 but was split by 1862 between the War Democrats and the anti-war element led by the "Copperheads". The Democrats made major electoral gains in 1862 in state elections, most notably in New York. They lost ground in 1863, especially in Ohio. In 1864 the Republicans campaigned under the Union Party banner, which attracted many War Democrats and soldiers and scored a landslide victory for Lincoln and his entire ticket.

The war years were quite prosperous except where serious fighting and guerrilla warfare took place along the southern border. Prosperity was stimulated by heavy government spending and the creation of an entirely new national banking system. The Union states invested a great deal of money and effort in organizing psychological and social support for soldiers' wives, widows and orphans, and for the soldiers themselves. Most soldiers were volunteers, although after 1862 many volunteered to escape the draft and to take advantage of generous cash bounties on offer from states and localities. Draft resistance was notable in some larger cities, especially New York City with its massive anti-draft riots of 1863 and in some remote districts such as the coal mining areas of Pennsylvania.