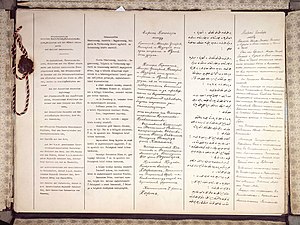 The first two pages of the Treaty of Brest-Litovsk, in (left to right) German, Hungarian, Bulgarian, Ottoman Turkish and Russian

Treaties can be loosely compared to contracts: both are means of willing parties assuming obligations among themselves, and a party to either that fails to live up to their obligations can be held liable under international law.