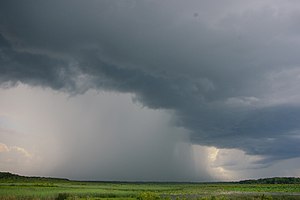 A typical thunderstorm over a field

A thunderstorm, also known as an electrical storm, a lightning storm, or a thundershower, is a type of storm characterized by the presence of lightning and its acoustic effect on the Earth's atmosphere known as thunder.<ref>{{#invoke:citation/CS1|citation |CitationClass=web }}</ref> Thunderstorms occur in association with a type of cloud known as a cumulonimbus. They are usually accompanied by strong winds, heavy rain and sometimes snow, sleet, hail, or, in contrast, no precipitation at all. Thunderstorms may line up in a series or rainband, known as a squall line. Strong or severe thunderstorms may rotate, known as supercells. While most thunderstorms move with the mean wind flow through the layer of the troposphere that they occupy, vertical wind shear causes a deviation in their course at a right angle to the wind shear direction.

Thunderstorms result from the rapid upward movement of warm, moist air. They can occur inside warm, moist air masses and at fronts. As the warm, moist air moves upward, it cools, condenses, and forms cumulonimbus clouds that can reach heights of over 20 km (12.45 miles). As the rising air reaches its dew point, water droplets and ice form and begin falling the long distance through the clouds towards the Earth's surface. As the droplets fall, they collide with other droplets and become larger. The falling droplets create a downdraft of cold air and moisture that spreads out at the Earth's surface, causing the strong winds commonly associated with thunderstorms, and occasionally fog.

Thunderstorms can generally form and develop in any particular geographic location, perhaps most frequently within areas located at mid-latitude when warm moist air collides with cooler air.<ref name="nssl.noaa.gov">{{#invoke:citation/CS1|citation |CitationClass=web }}</ref> Thunderstorms are responsible for the development and formation of many severe weather phenomena. Thunderstorms, and the phenomena that occur along with them, pose great hazards to populations and landscapes. Damage that results from thunderstorms is mainly inflicted by downburst winds, large hailstones, and flash flooding caused by heavy precipitation. Stronger thunderstorm cells are capable of producing tornadoes and waterspouts.

}} There are four types of thunderstorms: single-cell, multicell cluster, multicell lines, and supercells. Supercell thunderstorms are the strongest and the most associated with severe weather phenomena. Mesoscale convective systems formed by favorable vertical wind shear within the tropics and subtropics are responsible for the development of hurricanes. Dry thunderstorms, with no precipitation, can cause the outbreak of wildfires with the heat generated from the cloud-to-ground lightning that accompanies them. Several methods are used to study thunderstorms, such as weather radar, weather stations, and video photography. Past civilizations held various myths concerning thunderstorms and their development as late as the 18th century. Other than within the Earth's atmosphere, thunderstorms have also been observed on Jupiter and Venus.